Lexus has confirmed that in addition to the new models we’re about to see unveiled at the Frankfurt Motor Show this month, it will add plug-in hybrids to its model line-up by the end of the decade – with a hydrogen fuel cell LS around the same time. 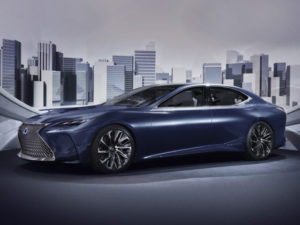 Lexus MD Ewan Shepherd told Fleet World: “At Frankfurt we’re going to see the LS for the first time, which comes out at the turn of the year.

“The minor change models we’ve also got are the CT, which is a reskin of the eight-year-old car, so it needs a bit of an injection.

“And the NX reskin gives it a stronger rear perspective, with a wider stance.

“They’re not significant changes but the big thing that goes with that is the introduction of Lexus Safety System+. That’s a big financial benefit; if we were to charge for that, it would be about £1,000 more per car, but we’re making sure that the lifecycle actions have a good customer benefit in the way we price those cars.”

Shepherd also revealed that the brand will strengthen its hybrid offer with new plug-in variants in the next couple of years.

“We will bring plug-in hybrids through in time and I think that’s where the industry will go. We’ve already got our hybrids, so we’re safe in the interim, but some of our models will have a plug-in – although we can’t confirm specifically which ones yet.

“But the long-term is about full EV and fuel cell. So it’s not unsurprising that we’ve got a whole division in Japan dedicated to EVs and another dedicated to fuel cells, as part of the $9.7bn a year we spend on research and development.”

Pushed on when we’re likely to see a hydrogen-fuelled Lexus, Shepherd said: “We haven’t got a date for that, but it will be on the back of LS. We revealed the concept two years ago, which showed the capability within Lexus. There’s no firm commitment in time to introduce it, but I would imagine the next two or three years is realistic.”For more of the latest industry news, click here.