A public consultation is now open on the proposed expansion of the London Ultra-Low Emission Zone up to the North & South circular, with fleets being invited to have their say. 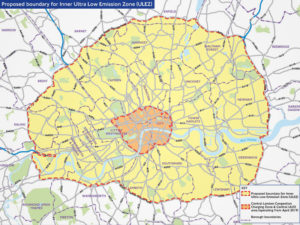 The expansion would see the ULEZ standards expanded up to – but not including – the North and South circular roads for cars, vans and motorbikes from 25 October 2021, as well as levying the existing Low Emission Zone scheme Londonwide for buses, coaches and lorries from 26 October 2020. The expanded scheme is predicted to cut NOx road transport emissions by 28% in outer London and 31% for inner London in 2021.

The latest consultation follows the confirmation earlier this month that the ULEZ will kick off from 2019 – 17 months earlier than originally planned – providing a replacement to the newly launched T-Charge and bringing much more onerous requirements.

Operating on the top of the £11.50 Congestion Charge, the ULEZ will be in place 24 hours a day, seven days a week, 365 days a year and requires vehicles to be a minimum of Euro 6-compliant for diesels and Euro 4 for petrols – compared to Euro 4 for both fuel types under the T-Charge. The ULEZ also increases the daily charge for non-compliant vehicles from £10 under the T-Charge to £12.50 (for cars, vans and motorbikes) and £100 (for buses, coaches and lorries).

Commenting on the announcement, John Pryor, chairman of ACFO, commented: “Obviously we would want to make sure that any zone increase doesn’t involve secondary charges – our main call has always been to have one system. But we would urge fleets to have their say as obviously it’s a much, much wider area than the initial zone.”

As well as announcing the opening of the consultation, the Mayor of London also reiterated his calls for the Government to introduce a diesel scrappage scheme.

Sadiq Khan commented: “The Government’s own data shows that roughly 40% of the UK’s roads exceeding legal pollution limits are located in the capital. Drivers need help switching to cleaner vehicles and greener alternatives and the whole of London needs a government which takes responsibility for this toxic air quality crisis.”

The consultation on the ULEZ expansion is open until 25 February 2018 with a decision expected in the spring.