Volkswagen could soon be selling more SUVs in ‘true fleet’ than it does Golfs, with the forthcoming T-Roc crossover potentially able to outperform the Passat once it becomes established. 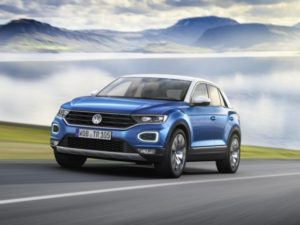 Arriving in the UK in December, the T-Roc takes the brand into a new segment; it’s platform-shared with the Golf, roughly the same size as an Audi Q2 and will be priced from £19,000 on the road in the UK.

Engines will include 1.0 and 1.5-litre petrol and 1.6 and 2.0-litre diesels, the Q2 line-up suggesting CO2 emissions could start from between 110-115g/km. A quarter are expected to go to fleets, and it’s predicted that most will be petrol-powered. Based on the Q2’s figures, CO2 emissions could be similar to equivalent diesel versions.

It launches as Volkswagen sets its sights on increasing its share of the booming market for SUVs globally. In the UK, that will comprise the T-Roc, Tiguan (in five and seven-seat ‘Allspace’ guise), a new Touareg (previewed by the T-Prime concept) which will be shown at the end of the year, and a Polo-sized T-Cross crossover featuring hints of the T-Cross Breeze concept, due in 2018.

Each will form part of its growing ‘true fleet’ presence. According to UK head of fleet, Michael O’Shea, true fleet registrations from January to the end of July totalled 31,322 units (+2.7%), representing a 9.5% market share. Order banks for the Golf are significantly up on 2016, suggesting an onward upward curve by the end of the calendar year. Almost 80% of that volume comes from three models, with the Golf taking 43%, the Tiguan 20% and the Passat 16%.

O’Shea wouldn’t comment on projected volumes, but hinted that the T-Roc could be a top-three big seller within a couple of years – which would mean it outselling the Passat. With the wider Tiguan range also likely to increase its footprint, combined Tiguan and T-Roc volumes could come close to the Golf’s, even before the other SUV newcomers arrive.

“Volkswagen has been and continues to be a one-stop shop for stakeholders across all channels,” O’Shea said. “We are confident in our ability [for T-Roc] to grow our volume in a new segment, particularly with the corporate user-chooser, and I think also within public sector.

“So I wouldn’t put a specific number on [T-Roc sales], but it’s back to that mantra of product availability and satisfying customer choice. Then about us trying to make sure that we pull that customers through that brand awareness, consideration to decision process, within our sales process.”