Volkswagen has announced further details for its Tiguan Allspace seven-seat SUV, which arrives in the UK this winter. 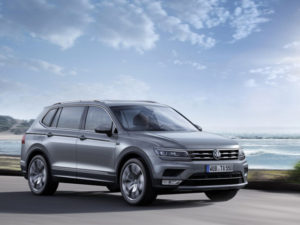 Tiguan Allspace seven-seat SUV arrives in the UK towards the end of the year.

Providing a rival to models such as the Land Rover Discovery Sport and Skoda Kodiaq, the Allspace is a stretched version of the standard Tiguan that will be sold as a five-seater offering extra space or with the option of seven seats to extend versatility.

Intended to fill the gap between the standard Tiguan and Touarag, the Allspace sits on a 109mm longer wheelbase with a 215mm longer exterior length. In five-seat version, it brings an extra 145 litres of space with the seats up, standing at 760 litres. This rises to 1,920 litres with the seats folded flat; up by 265 litres on the standard Tiguan. In the optional 5+2 layout, the Allspace will bring 230 litres of space, rising to 1,775.

As with the facelifted Golf, the Allspace will also feature the new generation Discover Pro Infotainment system with gesture control.