Next Touareg to head four-strong VW SUV range in Europe 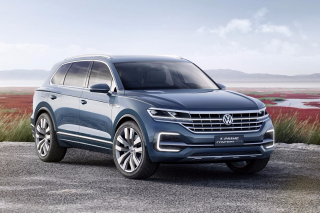 The T-Prime Concept GTE was unveiled at Auto China in Beijing, and is said to offer a glimpse of a future SUV, likely to be the next Touareg. It features a buttonless dashboard with a focus on gesture and voice control – technologies Volkswagen has made no secret that it wants to bring to market in the near future.

As the GTE badge suggests, the concept is also a performance plug-in hybrid. Power comes from a 375bhp four-wheel drive system with a fully-electric range of around 31 miles, claimed to offer over 94.2mpg on the European economy cycle, equating to less than 70g/km CO2.

The next Touareg will be positioned at the top of a four-model SUV line-up in Europe, which launched with the new Tiguan. Volkswagen said it plans to launch a Golf-sized SUV, derived from the T-ROC concept’s styling, as well as a Polo-based rival for the Nissan Juke, previewed by the T-Cross Breeze concept revealed at this year’s Geneva Motor Show.

A mid-size SUV for China and North America is also under development.