Carmakers’ introduction of sleeping fobs is helping to resolve the keyless vulnerability problem in the short term but a long-term solution is still needed. 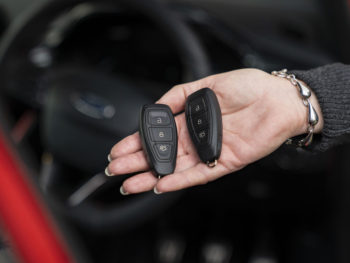 Latest car ratings issued by Thatcham – published to help consumers understand theft risks, both in terms of physical and digital security – have seen six new cars pass the Relay Attack test and gain superior ratings. The Audi A6 Allroad, BMW 1 Series, BMW 8 Series and BMW X6, along with the Ford Puma and Volkswagen Passat were all recognised for all-round security and the presence of a Relay Attack fix.

It marks significant progress from the results in both June and March, when a number of cars were given poor ratings when keyless entry / start were taken into account as a result of not having any security measures in place to prevent criminal exploitation of the keyless entry / start system.

The new ‘sleeping’ car fobs – introduced on models such as the Ford Focus and Fiesta – combat this issue, using motion sensors inside the fob to detect when it has been stationary for a period and trigger a sleep mode. This means the fob will no longer respond to attempts to relay its signal. Full functionality is restored when the owner moves the key.

But carmakers are not out of the woods yet. “The motion sensor fob is a good short-term option,” said Richard Billyeald, chief technical officer, Thatcham Research, “but the goal for carmakers must be to design out the vulnerability entirely. Until then, a fundamental security flaw remains.”

He also warned that relay attack remains an issue for drivers of existing models.

“Many owners who opted for keyless entry and start will have done so before a motion sensor fob was issued or will own a car where a fob of this type is not available at all,” continued Billyeald.

Suggested solutions for drivers of cars where a motion sensor fob is not available include:

Purchasing a Faraday pouch – such as Kia’s solution – and using it to store their fob at night. Owners are advised to test that it works for themselves

“We urge manufacturers to bring keyless technology to market in secure form and remove from drivers the onus to provide additional security. Closer collaboration on the design and implementation of new technologies is the key to identifying vulnerabilities before they entrench in the vehicle parc,” Billyeald finished.

*Thatcham Research tested one model with keyless entry and start fitted. This may be an optional feature on some or all models.