The Mazda6 will get updated styling, premium interior upgrades and new technology as part of a heavy upgrade due next year. 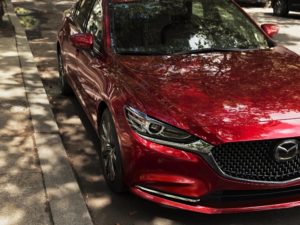 Set to be fully revealed at the Los Angeles Motor Show at the end of the month, the updated car will get minor styling alterations to bring the design in line with newcomers such as the new CX-5 crossover.

It’s a hint that the all-new version, previewed by the Concept Coupe in Tokyo last month, is at least two years away.

This is paired with a heavily revised interior, with a focus on improving material quality and de-cluttering the design, incorporating a genuine wood inlay. The update also adds a new version of the radar cruise control system which can bring the car to a full stop and pull away in traffic, as well as a simulated birds-eye view for parking manoeuvres.

Mazda has so far only revealed engine options for North America, including a petrol engine which can shut off two of its four cylinders to save fuel. The European-market line-up is likely to remain pretty much unchanged.

Previous: FEATURE: Are your mobile workers at risk from hackers?
Next: Majority of fleet drivers not getting formal road risk training