Mazda concepts hint at next 3 and 6

Mazda has previewed its next-generation 3 and 6 models, outlining a product strategy which will combine more efficient combustion engines with electrification technology. 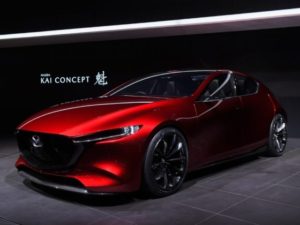 The Kai concept, a five-door hatchback, offers some hints of the next Mazda3, possibly due next year. It’s shorter overall, but with a longer wheelbase than the current car, while the front-end design echoes the CX-5 crossover launched earlier this year. It will debut a new platform, with a better driving position, sharper responses and improved refinement, aimed at offering a more comfortable, less tiring, and direct responses to driver inputs.

This will also be the first model to feature the new Skyactiv-X petrol engines, which feature a more efficient combustion cycle similar to a diesel engine, compressing the fuel to the point of combustion rather than relying on a spark plug like most petrol engines. Mazda claims this offers the best of both worlds; the rev response of a petrol engine, but with 30% more torque than today’s Skyactiv-G units, and fuel economy set to at least match the Skyactiv-D diesels. 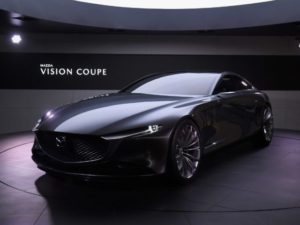 The Vision Coupe, a four-door concept car again mirroring the front end of the new CX-5, looks a little further from production and is likely to preview the next Mazda6, which is due in 2019. This is also likely to feature the Skyactiv-X petrol engines, and will benefit from the same comfort and driver enjoyment upgrades as the Mazda3 as the brand aims to push its products upmarket.

As yet, there’s no indication of how Mazda’s electric mobility joint venture with Toyota and Denso will materialise within these product ranges, but Masamichi Kogai, representative director, president and CEO of Mazda Motor Corporation, said the company was taking a well-to-wheel approach to cutting carbon emissions: “In addition to reducing emissions under real-world conditions, we believe that the best way to achieve this is through a multi-solution approach that offers a mix of combustion engines and electrification technologies in view of each region’s energy situation and power sources,” he said.