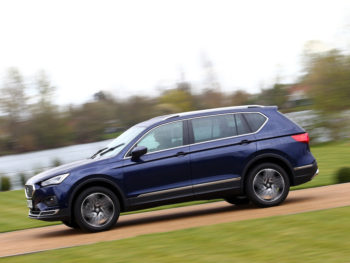 It might not look it, but the new Tarraco is a pivotal car for SEAT in the UK. Not only does it complete their SUV line-up, that was started by the Ateca three-years ago, but it also previews the Spanish brand’s family look for their next-generation of cars.

Best described as handsome, though if you think the Tarraco looks familiar – you’d be right, as it is based on the Volkswagen Tiguan Allspace. As such, this SEAT looks more Wolfsburg than Martorell – right down to the Volkswagen logos on its windows! No surprise then, that it’s assembled alongside its sister SUV, in the German factory.

That Volkswagen feeling carries on to the interior of the biggest SEAT SUV, think soft-touch plastics, quality trim and switchgear, plus high-tech features such as the easy-to-read LCD instruments. Look closer however, and savings have perhaps been made at foot level, with shinier, harder plastics.

On top of the quality, practicality is another Tarraco selling point, with seven-seats fitted as standard. Plus, the tall driving position is comfortable, the seats supportive and it feels spacious in the front and rear. There’s still 230-litres of bootspace – even with the third row of seats in place.

Our 2.0 TDi 190 Excellence test car was well-equipped with metallic paint, 19-inch alloy wheels, Sat-Nav and adaptive cruise control as standard. Although the navigation system on our car was slow to boot up, and felt glitchy when trying to plan routes.

Powered by the 188bhp version of the 2.0-litre TDi diesel engine, yet despite all this muscle, I found it very slow off the mark and not particularly smooth – although it was refined and torquey on the move. On the road, the steering is reasonably precise, body control is also good for such a big, tall SUV.