By Natalie Middleton / 1 year ago / Features / No Comments

Smart motorways have been in the headlines in recent weeks after a BBC Panorama special found 38 people have been killed on them in the last five years. But do your drivers have cause to worry and what should you be doing, asks Natalie Middleton. 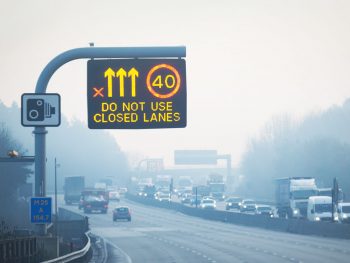 ‘Dynamic Hard Shoulder Running’ smart motorways have been followed by ‘All Lane Running’ schemes such as on the M25; and it’s these that are causing controversy.

What’s behind the headlines?

Seen as a panacea to our congestion woes, smart motorway schemes have been increasingly rolled out across the UK to provide extra road capacity without the need for controversial and expensive road-widening schemes. There’s now some 400 miles of smart motorways in the UK.

Based on the success of the initial M42 ‘managed motorway’, they originally looked like a good idea; by using an ‘active traffic management’ scheme, with technology to monitor traffic flow, Highways England could vary the speed limit and open up the hard shoulder at busy times. This technique has since been put into effect on the M1, M4, M5, M6 and M62, which are now sometimes referred to as ‘Dynamic Hard Shoulder Running’ schemes.

And analysis of statistics gathered since the opening of the M42 indicates such schemes can work; the data showed journey reliability had improved by 22%, personal injury accidents had reduced by more than half and, where accidents did occur, severity was much lower overall with zero fatalities and fewer seriously injured.

However, more recently the Government has gone ahead with a different type of smart motorway in the form of ‘All Lane Running’ where the hard shoulder is permanently converted to a running lane. These also use overhead gantry schemes to display the speed limit and the ‘Red X’ symbol if a lane is closed to traffic, but Emergency Refuge Areas (ERAs), or SOS areas, can be up to 2.5km (1.6 miles) apart compared to 500-800m for Dynamic Hard Shoulder Running ones.

It’s these schemes that have caused major concerns for motoring and road safety organisations. Which the Government responded to by announcing a review into their safety in October 2019, as Transport Secretary Grant Shapps said: “We know people are dying on smart motorways.”

Providing unfortunate proof of the Transport Secretary’s words, a BBC Panorama special has found that 38 people have been killed on smart motorways in the last five years and that on one section of the M25, outside London, the number of near misses had risen 20-fold since the hard shoulder was permanently removed in April 2014.

The programme also highlighted that features on the UK’s original smart motorway schemes, including the aforementioned dynamic hard shoulder on the M42 and M4/5, had not been carried over to today’s All Lane Running smart motorways and that SOS areas are up to twice the distance apart.

Since then, there have been formal allegations of corporate manslaughter against the chief executive and other senior officials of Highways England by families of people killed on smart motorways.

At the same time, a report by MPs on the All Party Parliamentary Group (APPG) for Roadside Rescue And Recovery has claimed that All Lane Running schemes have been rolled out in the UK with “a shocking degree of carelessness”.

According to the report, these schemes have a current live lane breakdown rate of 38% – nearly double that of the 20.43% on traditional motorways.

The report also highlights data from M25 evaluations showing a shocking degree of non-compliance – given as 8% – with Red X signals; putting not only motorists at risk, but also vehicle recovery operators, emergency services and traffic officers, according to MPs.

What needs to change?

As well as recommending that the roll-out of All Lane Running motorways should be halted until there is more safety data – something that the Government has agreed with – MPs say they should be stopped until the live lane breakdown rate is at or below the 20.43% figure calculated for traditional motorways.

Importantly, they have called for all existing stretches of All Lane Running to have additional Emergency Refuge Areas retrofitted such they are no more than 800m apart.

They also say all existing stretches of ALRs should be retrofitted with Stationary Vehicle Detection (SVD) systems. AA analysis published last year of a Highways England document shows it takes Highways England more than 17 minutes to spot a broken-down vehicle in a live lane on an All Lane Running motorway when SVD systems are not in place, yet they’re currently just on 25 miles of smart motorway on the M25.

And MPs say there must be more Highways England Traffic Officers and a marked improvement in their response times to live lane breakdowns.

What’s the advice to fleets and drivers?

Road safety charity IAM RoadSmart has highlighted that breaking down on any motorway is always dangerous and stressful but says it is even more vital on smart motorways that fleet drivers minimise the chance of an incident and know what to do in the unlikely event that they break down.

Advice includes to always be aware of the displayed speed limit, obey red X signs and don’t change lanes. Don’t join a motorway if your fuel is low or your car is faulty. If you believe your car is in trouble, try to get into an emergency refuge. And if you break down in a running lane, switch on your hazard warning lights and wait for help in the car. If possible get to the nearside lane where you may be able to exit safely over the barrier from the non-traffic side. Do not exit into a live lane and do not attempt to use a warning triangle.

The charity also says fleet managers should be aware that Highways England is constantly reviewing CCTV footage and has been sending warning letters to companies whose drivers have been spotted persistently breaking red X or warnings, and even visiting the worst offenders.

“So if you don’t want a semi-official knocking on the door, make sure your employees know how to deal safely with smart motorways,” IAM adds.