The Government’s 220-page Transport Decarbonisation Plan is now out, providing a first-ever pathway for the whole transport sector to reach the legal requirement of net zero by 2050. Natalie Middleton looks at the main points and the fleet and automotive sector’s reaction. 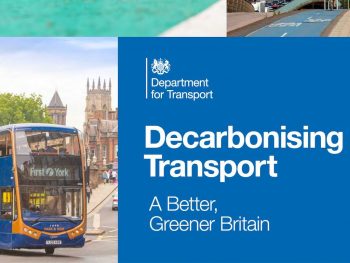 The long-awaited plan, originally due at the end of 2020, has been published just months before the COP26 climate summit and outlines how the Government will decarbonise transport, which is the largest contributor to UK domestic greenhouse gas (GHG) emissions.

The new plan comes 16 months after the ‘Decarbonising Transport: Setting the Challenge’ document was published, which amalgamated existing work to reduce emissions across all forms of transport and laid out the scale of the additional reductions needed to deliver transport’s contribution to net zero by 2050.

The ‘Decarbonising Transport: A Better, Greener Britain’ plan sets out how the Government will deliver those emissions reductions and is divided into two parts: ‘Decarbonising all forms of transport’ and ‘Multi-modal decarbonisation and key enablers’.

Alongside work to decarbonise railways and accelerate both maritime and aviation decarbonisation, including through the Jet Zero consultation, there are six main points of particular interest to vehicle fleets.

2040 ban on diesel and petrol HGVs

The plans include a proposal to phase out the sale of new diesel and petrol HGVs by 2040, subject to consultation. The plan is for sales of smaller diesel trucks to be banned from 2035 and larger ones by 2040 “or earlier if a faster transition seems feasible”.

This joins the existing 2035 phase-out date for polluting cars and vans and means that all polluting road vehicles will start to be phased out within the next two decades.

Eco campaign group Transport & Environment (T&E) welcomed the 2040 proposal as a ‘milestone’ in the shift to greener transport, but warned more difficult decisions to reduce vehicle use and flying will still be needed to meet the UK’s ambitious climate goals.

CEO Essa Al-Saleh commented: “Trucks account for less than 2% of road vehicles but 22% of CO2 emissions from road transport, and the relative share of truck emissions is certain to increase as emissions from passenger cars are driven downwards by the surge in the sales of electric cars.

“It’s therefore disappointing that the UK government hasn’t been as ambitious as the French authorities, for example, who have banned diesel engine trucks from the streets of Paris and other large city centres by the end of 2023. This type of progressive legislation, twinned with incentives, is what’s needed to accelerate the migration to zero-emission large commercial vehicles.”

The Government reinforced its November 2020 commitment for all new cars and vans to be fully zero emission at the tailpipe from 2035 with the publication of a 2035 delivery plan, as part of a complementary package of documents and consultations.

Published following last year’s consultation on the ICE ban, the publication brings together all of the measures for decarbonising cars and vans, from across government, into a single document, including key timelines and milestones.

The plan includes key commitments on increasing uptake of zero-emission vehicles, including an aim to introduce a new road vehicle CO2 emissions regulatory regime in 2024.

Progress will be monitored on an annual basis and the DfT said it will conduct a review of progress towards the phase-out dates by 2025, with a view to taking corrective action if required to ensure they are met.

The plan also commits to continue supporting demand for zero-emission vehicles through a package of financial and non-financial incentives – but the £582m mentioned for plug-in grants was already mentioned in the reduced grants announced earlier this year and the “favourable” company car tax rates for zero-emission cars to 2025, along with the nil rate of tax for zero-emission vans within the van benefit charge, had also already been established.

Hydrogen is not left out of either the Transport Decarbonisation Plan or the 2035 Delivery Plan and the DfT said it would be assessing hydrogen’s role in a decarbonised transport system. The Government will publish a Hydrogen Strategy in summer 2021, which will focus on the increased production of hydrogen and use across the economy, including for transport. And it will invest £13m in 2021 to establish the UK’s first multi-modal hydrogen transport hub in Tees Valley.

Randolph Brazier, director of innovation at the Energy Networks Association, which represents the UK and Ireland’s gas and electricity network operators, said: “There’s a much bigger role to play for hydrogen in enabling cleaner heavy transportation on our roads, rail, seas and skies in the future. Investment is what’s needed – but we can’t wait to make that investment ‘just in time’, we need to be making bold decisions and start laying the groundwork now.”

Government fleet to go zero-emission by 2027

The Transport Decarbonisation Plan sets out a commitment to “lead by example” with 25% of the government car fleet to be ultra-low emission by December 2022 and 100% of the car and van fleet to be zero-emission by 2027, three years earlier than planned.

Patrick Hall, senior research fellow at independent think-tank Bright Blue, said: “The Government’s commitment to electrify its fleet of 40,000 cars and vans is a laudable one. As well as reducing emissions, this will have the added benefit of increasing the supply of zero-emission vehicles into the second-hand market, giving those on more modest incomes an opportunity to go electric. However, the Government needs to go further in helping those on more modest incomes, by introducing a Used Plug-in Car Grant for second-hand zero-emission vehicles. It is imperative that the market for battery electric vehicles – both new and used – grows substantially over the next decade if the UK is to meet its legal net zero 2050 emissions target.”

The plans also include a commitment to consult on regulatory options, including zero-emission vehicle mandates, to deliver petrol and diesel phase-out dates for new vehicles.

A ZEV mandate requires carmakers to sell a certain proportion of zero-emission vehicles. Currently, carmakers are required to comply with the EU’s ‘CAFE’ CO2 emission legislation, which brings strict CO2 targets aimed at tackling global warming and fines if they are missed. These have now been carried over into UK legislation, following Brexit.

Responding to the new Transport Decarbonisation Plan, the Climate Change Committee – the Government’s independent advisors on the climate – said it was particularly pleased to see the proposals for a ZEV mandate. It had already recommended a ZEV mandate as key to reducing emissions from UK transport since the net zero target was set and reiterated this in its progress reports last month where it had warned that we are “in the decisive decade for tackling climate change”. The CCC had urged for car manufacturers to be required to sell a rising proportion of zero-emission vehicles, reaching nearly 50% by 2025 and 100% by 2030, with only a very small proportion of hybrids allowed alongside until 2035.

Meanwhile, Centrica, owner of British Gas, which has committed to electrify its 12,000-strong operational fleet by 2025, said the proposal on a ZEV mandate was “music to our ears”.

T&E also welcomed the move, adding: “This will ensure that electric vehicles are affordable and will create well-paid jobs in car and battery manufacturing.”

And Jon Lawes, managing director of Hitachi Capital Vehicle Solutions, said that the ZEV mandate must be followed through on, to ensure that the automotive industry meets these targets and the rising demand for ZEVs from businesses and consumers.

“With manufacturing initiatives such as Stellantis’ announcement that its first dedicated EV factory in Europe will be at Ellesmere Port, the UK is in a strong position to significantly ramp up its EV production in the coming years. Introducing a ZEV mandate would be a milestone policy to encourage all manufacturers to consider their vehicle output and establish ambitious strategies to phase out petrol and diesel vehicles.”

Alongside the Transport Decarbonisation Plan, the Department for Transport and OZEV published the response to the electric vehicle smart charging consultation, committing to laying legislation later this year to ensure that all new private EV charge points meet smart charging standards, saving consumers money on their energy bills while also helping to support the grid.

Both the Transport Decarbonisation Plan and 2035 Delivery Plan also include a raft of other commitments on the Government’s plans for EV infrastructure. Its vision is for motorway services to have at least six ultra-fast (150-350kW capable) open access charge points in England by 2023, with some larger sites having as many as 10-12. And by 2035 it expects around 6,000 ultra-fast charge points across England’s motorways and major A-roads.

And later this year, the Government will publish an EV infrastructure strategy, setting out its vision for infrastructure rollout, and roles for the public and private sectors in achieving it.

Responding to the smart charging commitment, David Watson, CEO and founder of Ohme, said: “We are pleased that the Government has recognised the critical role played by smart charging technology to underpin a successful decarbonisation programme. Legislation to ensure all private EV charge points meet smart charging standards is a step in the right direction, but simply declaring something as ‘smart’ isn’t enough.

“To ensure these technologies are adopted at scale, we need to see a holistic approach to smart charging to manage the spikes in demand due to mass EV adoption. This must include incentives for consumers, businesses and fleets, in addition to education and awareness campaigns, and greater collaboration between government, energy companies and clean tech companies.

“Smart charging technologies bring down the cost and complexity of electric vehicle charging and help to balance the National Grid. Without a concerted and holistic effort to encourage adoption, we risk undermining the success of the EV transition in the UK.”

But Chris O’Shea, group chief executive at Centrica, said more work is also needed for on-street charging: “While there are some positive steps around charging infrastructure in the plan, we feel it’s absolutely vital that large sections of society aren’t left behind simply because they don’t have a driveway.

“We need to see a substantial increase of on-street chargers in built-up areas, charge points at work and leisure destinations, and rapid charging across the UK’s motorway network.

“It’s vital that government and business work together to deliver a cleaner transport network that’s both affordable and convenient for consumers.”

Under the multi-modal decarbonisation section, the plan sets out proposals to reduce vehicle use, particularly in cities, and improve public transport and increase support for active travel to make them the natural first choice for all who can take them.

There are a number of notable commitments here:

The DfT will also identify specific opportunities for decarbonisation through innovation in rural areas in the upcoming ‘Future of Transport: Rural Strategy’.

The Campaign for Better Transport said there was a lot to welcome in the report, but Silviya Barrett, head of policy, research and projects, continued: “What this plan does lack is any concrete measures to rebalance transport spending away from road building and towards more sustainable modes. Reform of vehicle taxation is long overdue, so we’re glad to see this is being hinted at in the plan, but we need to see a formal commitment and a timeframe for replacing the current system with distance-based road pricing to help support the transition to cleaner vehicles and greater use of public transport and other green modes.”