Order books are now open for the Škoda Scala; marked out as the brand’s first-ever direct rival to the Ford Focus and VW Golf. 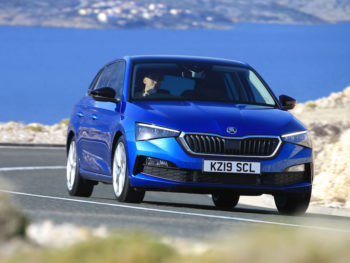 Order books are now open for the Škoda Scala

The replacement to the slow-selling Rapid, the Scala (see first drive here) is marked out as the first Škoda to use Volkswagen Group’s scalable MQB A0 platform, also used to underpin the VW Polo and Seat Ibiza superminis but actually bringing similar dimensions to the Golf for the Scala. Meanwhile boot space that ranges from 467 to 1,410 litres is said to be class-leading.

The Scala is priced from £16,595 and offered with three engine options, comprising 115hp 1.0 and 150hp 1.5 TSI petrols along with a 115hp 1.6-litre TDI diesel. A 95hp 1.0 TSI joins the line-up later this year. All engines come with five or six-speed manuals and, bar the forthcoming 95hp unit, are available with an optional seven-speed DSG transmission.

Three trim grades – S, SE and SE L – will be offered from launch and will bring air con, alloy wheels and LED headlights as standard.