Honda’s fifth-gen CR-V has ditched diesel to turn to hybrid power. Martyn Collins puts its performance to the test. 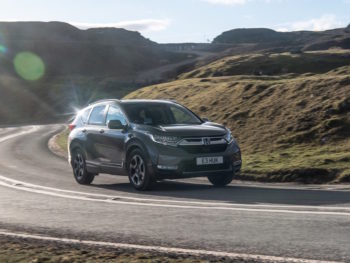 One of the original models to start the compact SUV revolution, the CR-V is now in fifth-generation guise; a move that has also seen it ditch diesel.

Alongside the 1.5 i-VTEC petrol engine that arrived last year, it’s now offered in a new fuel-saving hybrid version with two- or four-wheel drive, bringing similar CO2 emissions to the 1.6-litre diesel it replaces, despite the move to WLTP-derived fuel economy figures.

Interestingly the CR-V feels more like an EV, than a hybrid, over the first couple of miles. It is eerily quiet in EV mode and the only time the 2.0-litre petrol engine brings an obvious intrusion is under hard acceleration. This is because, unlike rivals such as the Toyota RAV4, the 2.0-litre petrol engine works as a generator, which in turn charges the battery to power a second motor that’s connected to the wheels. In fact, the only time the engine drives the wheels is under hard acceleration, and there is a direct connection via a fixed-gear transmission.

Unfortunately, the fact that the CR-V is impressively refined – and a willing performer the rest of the time – makes it all the more obvious when the engine is helping with acceleration, sounding noisy and strained. This is disappointing, as apart from this the CR-V Hybrid is a very relaxing car to drive.

In fact, the general feeling of smoothness carries on with the CR-V Hybrid’s ride – which is generally composed and comfortable. However, on the flip side, the soft suspension doesn’t make the CR-V feel particularly dynamic to drive. However, having tried the 1.5-litre i-VTEC petrol CR-V, I found the Hybrid to have better steering feel, which gave more confidence on twisty B-roads.

Elsewhere, the CR-V’s interior is spacious, although the hybrid kit has an effect on boot space, which is reduced to 497 litres compared to the standard car’s 561 litres. The SR trim has all the kit you need; LED headlights, lane keep assist, a seven-inch touchscreen with satellite navigation and a reversing camera are all included.