Shell has opened a hydrogen refuelling station on the M40 at the Beaconsfield Services. 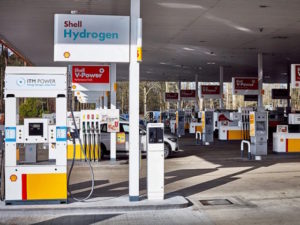 The Shell Beaconsfield site on the M40 is said to be the first to offer to hydrogen and petrol/diesel under the same canopy.

The site is the first in the UK to offer hydrogen under the same canopy as petrol and diesel and follows the launch of Shell’s first hydrogen site in the UK at Shell Cobham in February 2017.

The station is owned and operated by ITM Power and generates hydrogen on-site using an electrolyser that requires only water and electricity.

The station is the first to be opened as part of the H2ME project, which is partially funded by the European Fuel Cells and Hydrogen Joint Undertaking (FCH JU), and the UK’s Office of Low Emission Vehicles (OLEV), and aims to expand both the number of fuelling stations in Europe and the hydrogen vehicles on fleets.

FCH JU executive director Bart Biebuyck said: “The FCH JU is proud to see its support significantly boosting market entry of hydrogen technologies for clean mobility. The opening of this new station at the Beaconsfield forecourt proves that hydrogen is now even more the fuel of the future, and is ready to offer an everyday green solution to citizens. We need to continue building on these achievements, and enable the transition towards a low-carbon transport system.”

The hydrogen vehicle sector also received a boost yesterday with the announcement of multi-million pound funding from the Department for Transport, which is to be used to increase the number of hydrogen refuelling stations in the UK, as well as put nearly 200 new hydrogen-powered fleet vehicles on the road.