A new on-demand bus service has gone in trial for 12 months in Ealing, London, following a successful public consultation earlier this year. 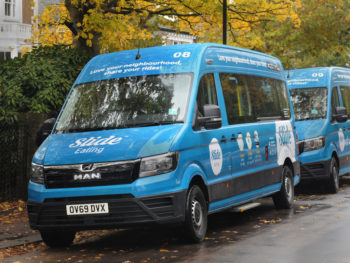 Provided by Transport for London (TfL), bus company RATP and German technology firm MOIA, the new service follows the start of a similar year-long trial in Sutton in May, both of which are intended to tempt travellers out of their cars.

In the case of the new scheme in Ealing, figures show that 40% of people living in the area use cars – either private or for hire – to get to work, and TfL believes an on-demand service could encourage people to switch to a more sustainable way of travelling.

The scheme will operate seven days a week, 0600-0100, and cover an area from Southall in the west to the North Circular, and from the A40 down to Boston Manor in the south of Ealing.

The bus picks people up from flexible stops, with passengers able to book a ride using the app, or on the phone. Once a ride has been secured, users will wait no longer than around 10 minutes for a bus.

Fares for the on-demand bus will start at a flat rate of £3.50, with passengers being able to benefit from weekly and monthly capping. Every tenth journey will be free.