Transport for London has launched a four-week consultation on plans to trial an on-demand bus service in Ealing to see if drivers switch away from commuting. 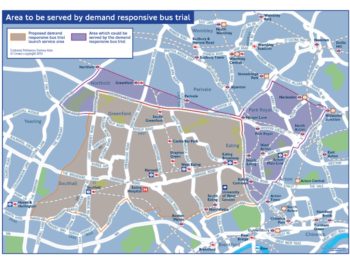 As with Sutton, the on-demand bus trial in Eling will last for a year

The new service follows the start of a similar year-long trial in Sutton in May.

Ealing has been chosen for the second trial because there are relatively high numbers of private vehicles in the borough. Figures show that 40% of residents use cars to commute in the area.

As with the Sutton trial, customers travelling on the new buses will be able to book a seat in real-time using an app or over the phone. The vehicles provide real-time journey information onboard and will not follow a fixed route, with users instead able to board a bus at flexible stops within a certain area. The buses will be fully accessible and green and will be available between 06:00 and 01:00, seven days a week.

The trial will be run by technology and mobility company MOIA and bus operator RATP Dev.

The consultation is asking Londoners for their views of the service, and the area and destinations it will cover.

Ealing has been chosen for the second trial, which will last a year, because there are relatively high numbers of private vehicles in the borough. Figures show that 40 per cent of residents use cars – be they private or for hire – to get to work in the area, and TfL believes the service could encourage people to switch to a more sustainable way of travelling.

Michael Hurwitz, TfL’s director of transport innovation, said: “We are always looking at new ways to help us meet the Mayor’s Transport Strategy goal to have, by 2041, 80% of trips to be walking, cycling and by public transport. These trials will help us to understand if a more flexible, on-demand offering will tempt people out of their cars to try more sustainable alternatives.”