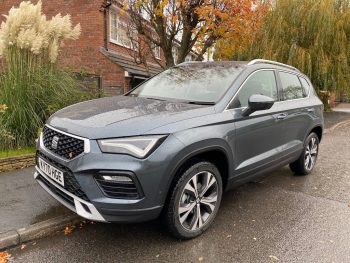 Considering this success, you’d expect any facelift to be minimal and that appears to be the case. Most obvious is the addition of new SEAT family design cues to this SUV. At the front, this means a new front grille, bumper and full LED headlamps – making it look more like the bigger Tarraco. Completing the Ateca’s external changes are new alloy wheel designs, full LED rear lights with sweeping indicators on top models, the exhaust is now covered by a new bumper and there’s distinctive new ‘Ateca’ badging in the centre of the boot.

Changes for the Ateca’s spacious, if slightly dated, interior focus on technology. The 10.25-inch SEAT Digital Cockpit is standard on FR Sport and Xperience Lux trims, while the range also gets an upgraded infotainment system, incorporating the new HMI interface, via either an 8.25-inch touchscreen or the 9.2-inch size that we had in our SE Technology test car.

The latest Ateca line-up now includes six trims. Xperience Lux is the new range-topper, but all are well-equipped. Our SE Technology is particularly suited to fleet, featuring the aforementioned 9.2-inch navigation system and online traffic information; although we found it a little fiddly to use.

The line-up is powered by a range of updated petrol and diesel engines. Our Ateca was fitted with the entry-level 1.0-litre, three-cylinder petrol. Despite its small size, this engine has a sprightly 110hp, a combined fuel consumption figure of 41.5-44.1mpg and CO2 emissions of 146g/km.

The Ateca still impresses on the road, with the same precise steering and tidy handling that it’s always had – bringing an engaging drive.

Improved specifications, plus affordable pricing and running costs, mark this facelifted SEAT out in this busy area of the market.