By Julian Kirk / 2 years ago / Road Tests / No Comments 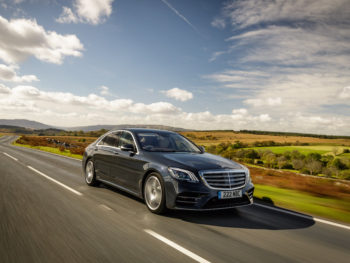 Short of the snarling 600hp-plus AMG super-saloons, this S-Class is the most powerful version of Mercedes-Benz’s luxury car on offer. It is, paradoxically, also the greenest and offers the lowest company car tax in the range.

Thanks to a new battery pack which can hold up to 50% more power than before, this S560e model offers some impressive on-paper statistics… 104mpg fuel economy, 57g/km CO2 emissions and an electric range of around 25 miles (while that latter figure may not sound too impressive, it is worth remembering that this S-Class weighs in at more than two tonnes).

There are more impressive figures on the spec sheet – a price tag just shy of £100,000, combined power output of 469bhp, 0-62mph in five seconds… all of which gives the S560e great luxury express credentials. It is not only fast, but incredibly refined, with little in the way of wind or engine noise intruding into the opulent cabin. In pure EV mode it is magically quiet and a cosseting ride just adds to the feeling of isolation from the outside world.

But it is the car’s financial performance that makes it more impressive. Thanks to those low emissions this car falls into the 16% benefit-in-kind tax bracket, spelling an annual company car tax bill of £6,234 for a higher rate taxpayer – that’s £5,200 per annum less than an equivalent diesel-engined S-Class which sits in the 37% bracket.

Companies buying this vehicle also stand to save – first year VED of £15 (£855 for the diesel) and an 18% Writing Down Allowance (6% for the diesel) give the S560e a distinct advantage on the balance sheet.

But this is a very niche product – it’s expensive and its on-paper promise depends hugely on being driven in the right way and in the right circumstances. For a director making regular short journeys in low emission zones and with access to a workplace charger, this car could make sense. For someone who also needs to do big mileages up and down motorways, the diesel will probably remain the default option.

What we think: A wonderfully refined luxury express with great on-paper green credentials.