Kia has announced pricing and specifications for its 2019 ProCeed, which has evolved into a shooting brake estate to bring increased practicality. 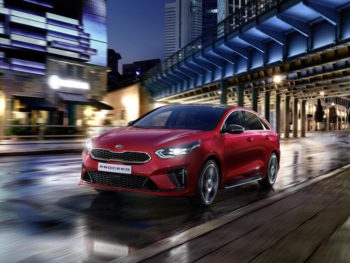 First unveiled four months ago following the Ceed Sportswagon concept at Geneva last spring, the new model moves away from the previous three-door hatch format due to Europe’s shrinking market in that sector, and instead brings the space and versatility of a tourer but with a “unique raked-back silhouette unlike anything in the family car segment”. It also ditches the previous pro_cee’d name formatting to become ProCeed.

It will still be sold alongside the new Ceed Sportswagon and uses the same wheelbase but the coupé-inspired body is lower and longer than both the Ceed five-door hatchback and Sportswagon. Boot space stands at 594 litres compared to 625 for the Sportswagon and the ProCeed also ditches the boot lip and brings a lower ride height than the Sportswagon. It also features 40:20:40 split-fold rear seats, folded with a single touch from a lever just inside the tailgate on the top trim, and a flat boot floor along with an underfloor storage area. The top trim also features automatic tailgate opening using a smart key sensor and a luggage floor rail system as well.

Positioned as the sportiest model of the latest Ceed family, the ProCeed will be available exclusively as ‘GT-Line’, ‘GT-Line S’ or high-performance ‘GT’ models.

The cabin bears many similarities with its Ceed compatriots but also introduces sportier styling elements, including black cloth for the roof lining instead of the grey on the Ceed hatch and Sportswagon, metallic scuff plates on the door sills, a D-shaped leather-trimmed steering wheel as standard, and new metal alloy steering wheel paddles for models equipped with Kia’s dual-clutch auto transmission (DCT).

Engine line-up covers two petrols and one diesel engine, depending on the model. Petrols include a 140hp 1.4-litre T-GDi power unit, which comes with six-speed manual transmission as standard and the option of Kia’s seven-speed auto DCT. Emissions start from 130g/km (NEDC Correlated) with fuel up to 45.6mpg combined (WLTP cycle).

The diesel is an all-new 1.6-litre CRDi diesel engine – the first diesel in Kia’s new Smartstream powertrain philosophy, which seeks to enhance fuel efficiency and performance with reduced emissions – and can be paired with a six-speed manual or seven-speed auto DCT. Emissions start from 110g/km (NEDC Correlated) with fuel up to 56.5mpg combined (WLTP cycle).

The GT-Line gets the choice of both of these engines while the GT-Line S  is only available with the 1.4 T-GDi engine, paired with the seven-speed DCT.

The top-spec GT is only available with a 1.6-litre T-GDi engine, identical to that found in the Ceed GT. This produces 204hp and 265Nm, and gets Kia’s seven-speed DCT for the first time, including the metal alloy steering wheel paddles. Emissions stand at 142g/km (NEDC Correlated) with official combined fuel of 39.3mpg (WLTP cycle).