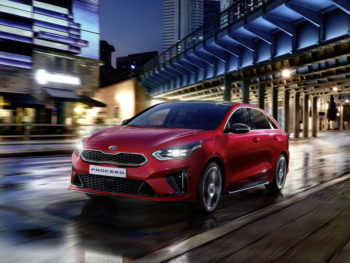 Shown in full following the teaser image a fortnight ago, the new model moves away from the previous three-door hatch format to bring “stunning design with the space and versatility of a tourer”, as previewed by the Ceed Sportswagon concept at Geneva this spring.

Explaining the rationale for the transformation, Gregory Guillaume, European head of design, said: “Europe’s shrinking market for three-door hatchbacks brought the future of the Procee’d in question. But it was equally inconceivable that we would simply kill off the Procee’d. It was not just the name we gave to our three-door cee’d. It embodies all Kia’s values of youthful dynamism, of emotional engagement, and of design-led desirability.

“We needed to reinvent the Procee’d to ensure that all that vitality and vibrancy wasn’t simply lost. It had to be a model that not only sat at the top of the current Ceed family, but one that was also immediately identifiable as the most emotionally engaging car in the range.”

Making its debut at the Paris Motor Show, the 2019 ProCeed will be sold alongside the new Ceed Sportswagon and uses the same wheelbase but the coupé-inspired body is lower and longer than both the Ceed five-door hatchback and Sportswagon. Boot space stands at 594 litres compared to 625 for the Sportswagon and the ProCeed also ditches the boot lip and brings a lower ride height than the Sportswagon. It also features 40:20:40 split-fold rear seats, folded with a single touch from a lever just inside the tailgate and a flat boot floor.

It will also be available exclusively as a ‘GT-Line’ or high-performance GT model, offering sportier exterior and interior styling.

Both petrols offer a six-speed manual transmission as standard, while the 1.4-litre T-GDi and the diesel are also available with Kia’s seven-speed Dual-Clutch Transmission.

Production of the ProCeed shooting brake begins in November, and sales commence exclusively across Europe in the first quarter of 2019. Full UK specification, pricing and on-sale date will be announced in due course.