Potholes are becoming a growing concern for drivers, overtaking texting and drink driving in problem ratings. 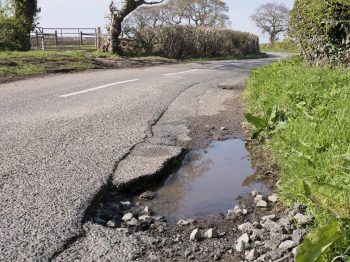 Research by IAM RoadSmart has discovered that three in four motorists (75%) now perceive potholes to be a bigger issue for road users than they were three years ago. This was followed by driver distraction (68%) – such as texting or talking on a mobile phone – and traffic congestion (65%).

Further findings from the report, now in its sixth year and which involves surveying more than 2,000 motorists, also discovered that around nine in 10 (89%) drivers have been affected by potholes over the last year.

Concern over potholes is now so high that just over one in three (31%) drivers have changed their route to avoid a pothole with, more worryingly, more than half (54%) having had to steer away or brake hard to avoid impact and damage.

“We simply can’t have vehicles swerving into oncoming traffic or slamming on their brakes without warning to avoid them. Deteriorating roads also put pedestrians and cyclists at greater risk.

“It is clearly a sign of the times when motorists perceive potholes to be a bigger growing concern to them than drink driving and texting. And while the statistics show that the devastating impacts of using a motor vehicle under the influence of alcohol or using a mobile phone when driving still remain, it does highlight that it is time for government to take potholes seriously and fix the UK’s road network.”

Research by the Asphalt Industry Alliance last year calculated the one-off cost of clearing the backlog on England and Wales’s pothole-ridden local roads would be £11.14bn; the AIA estimates there are some 42,675 miles of UK roads classed as being in Poor structural condition.

The Association of Fleet Professionals (AFP) has already urged the Government to include further investment in roads and pothole repairs as part of a range of actions in next month’s Budget; the AFP has warned of the risks to both motorists and cyclists due to the current poor state of UK roads.