New technology that could automatically detect drivers not complying with ‘Red X’ lane closure signs on smart motorways could go live from the spring. 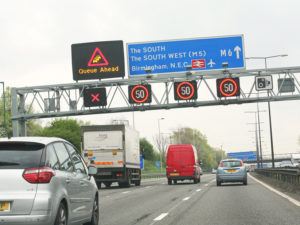 According to the Press Association, Highways England has revealed in a document that it is testing roadside cameras that detect when drivers still use lanes flagged with the ‘Red X’ signs on overhead gantries, which could go live from the spring.

A Highways England spokesperson confirmed to Fleet World that there is a new proposal to enable existing technology to automatically detect when drivers do not comply with the lane closures.

This would help the police whose responsibility it is to carry out enforcement activity and could see more drivers receiving fixed penalty notices for flouting the law – currently drivers are sent a cautionary letter if they are observed going through a Red X when a lane is closed, as observed by way of CCTV and traffic officers. Around 80,000 warning letters have been issued since November 2016.

The spokesperson added that the actual details of the penalties that drivers could incur for Red X infringements in the future is still being worked on.

They commented: “Safety is at the heart of everything we do and our roads are amongst the safest in the world. We close lanes for a reason and drivers ignoring red Xs puts them and others at risk.

“Since we started issuing warning letters we have seen a decrease in the number of drivers ignoring lane closures.”

Recent months have also seen Highways England run a media campaign covering key themes such as not driving in lanes closed by Red X signs and how to stop in an emergency – as well as trialling a bright orange emergency refuge area on the recently launched M3 smart motorway in Surrey.