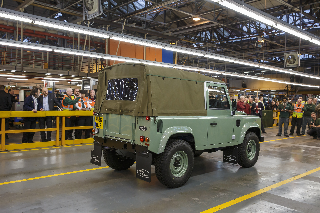 More than 700 current and former Solihull employees involved in the production of Series Land Rover and Defender vehicles attended the event, which also marked the announcement of a new Heritage Restoration Programme.

Over two million Defenders have been built over the years and used by a wide number of British fleets, as well as by the Queen and even in a number of films, including James Bond.

The last model, a Defender 90 Heritage Soft Top, will be housed in the Jaguar Land Rover Collection.

Dr Ralf Speth, CEO of Jaguar Land Rover, said: “Today we celebrate what generations of men and women have done since the outline for the Land Rover was originally drawn in the sand. The Series Land Rover, now Defender, is the origin of our legendary capability, a vehicle that makes the world a better place, often in some of the most extreme circumstances. There will always be a special place in our hearts for Defender, among all our employees, but this is not the end. We have a glorious past to champion, and a wonderful future to look forward to.”

The new Heritage Restoration Programme programme will be based on the existing site of the existing Solihull production line and will see a team of experts oversee the restoration of a number of Series Land Rovers sourced from across the globe.

For an indepth feature on the Defender and its success among British fleets, click here.