Kia has outlined details of its XCeed crossover, which will target buyers looking for SUV practicality with claimed hatchback driving dynamics. 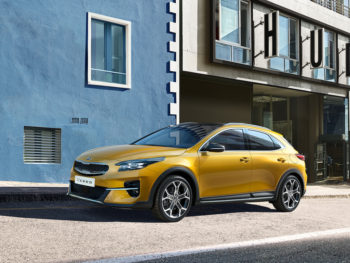 The XCeed is the fourth model in the Ceed range

The fourth model in the Ceed line-up, the XCeed joins the five-door hatchback, Sportswagon estate and ProCeed shooting brake, and will be bring a rival to models such as the Ford Focus Active.

But Kia also says the XCeed provides a sporty alternative to larger traditional SUV models, offering comparable cabin and luggage space to an SUV in a more compact body while also bringing the sporty packaging and engaging handling of a hatchback.

It’s based on the Ceed platform but the body is 85mm longer than the five-door hatch thanks to extended front and rear overhangs and 43mm higher while offering increased boot space of 426 litres (VDA), 31 litres more than the Ceed, rising to 1,378 litres maximum. Features include 40:20:40 split-folding rear seats, electronic tailgate and a two-step boot floor that can be moved up or down to provide either more space or a hidden underfloor storage compartment.

Ride height is up by 42mm over the Ceed five-door hatchback and its SUV looks are enhanced by wheel arch and side sill cladding and silver roof rails while the front-end also gets revised features including bumper and headlights to mark it out within the Ceed range.

The XCeed also gets a bespoke handling set-up not seen in other Ceed models. Despite its elevated ride height, it’s claimed to be more engaging to drive than a typical family SUV due to its bespoke suspension tuning, more compact exterior dimensions, lower centre of gravity and reduced overall mass.

It’s also said to provide a more comfortable, assured ride thanks to new hydraulic rebound stoppers fitted as standard to the front axle of all models, which are also credited as helping to bring more responsive steering and improved overall body control, while reducing noise from the suspension over bumps. And front and rear spring rates have been softened by 7% and 4% respectively to deliver enhanced comfort and stability, while the XCeed is also said to bring similarly quick steering responses and comparable levels of body roll to the standard Ceed five-door hatchback.

Inside, the Kia XCeed carries over the cabin design of its Ceed stablemates, with a sculptured centre console orientated slightly towards the driver and a bespoke XCeed yellow colour pack for the interior, bringing black upholstery and contrasting yellow details.

Onboard equipment includes one of the first debuts in Europe of Kia’s UVO Connect telematics system, accessed via an optional 10.25-inch TFT LCD widescreen and bringing Kia Live services and diagnostic data.

Deliveries are due to start in Europe in Q3 – with the UK on-sale date still to be announced. All models come with Kia’s usual seven-year warranty as standard.