Skoda has modified its Kodiaq vRS SUV as a police pursuit vehicle, bringing a 7.0-second 0-62mph time and a top speed of 136mph. 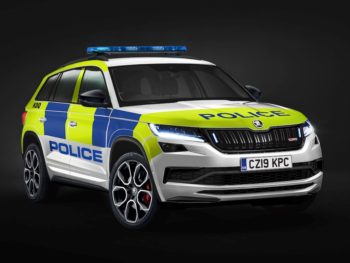 The Škoda Kodiaq vRS modified for the police force

Debuted at the Paris Motor Show in October 2018 and marked out as the first SUV to get the vRS treatment, the Kodiaq vRS launched in January and features a 240hp

The pursuit vehicle conversion is based on the Kodiaq’s original seven-seat layout and designed to offer excellent levels of space and payload capabilities.

Features include 360-degree visibility thanks to powerful LED signal lights built into the front screen, grille, tailgate and number plate – all complemented by a 100-amp three tone siren.

Planning is underway to include control of the blue light and emergency services communications system via the integrated touch screen display on the dashboard.

Henry Williams, Škoda head of fleet, commented: “The high-performance credentials of the Kodiaq vRS make it a powerful addition to the pursuit vehicle line-up. It offers power, precision drive and good visibility to other drivers on the road.”