By Martyn Collins / 1 year ago / Interview / No Comments

Not in the job for a year, JLR’s still-new managing director Rawdon Glover met up with Martyn Collins to talk fleet. 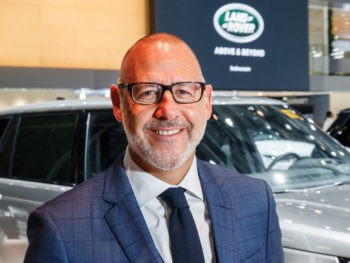 What is the current state of the fleet market for JLR in the UK?

There are two ways of looking at our business; either we’re very strong on retail or not very good at fleet. Looking at our retail mix, it’s really strong and actually, our true fleet figure is less than 20%. So in premium terms, that’s pretty low. In terms of our approach, what I don’t want to do is forgo retail volume for fleet for obvious reasons.

I think coming in, one of the opportunities moving forward is to forensically dissect the fleet market and understand our product range and our strengths. Then say this is where we want to play from a product proposition point of view — whether it’s pricing, whether it’s CO2 and the commercial viability of some aspects of the fleet market. After this, then really interrogate the market in that way and see what opportunities exist.

As I say, if it’s saloons, XE and XF perform well. We’ve got a range of medium-size SUVs – E-Pace, F-Pace and obviously now with a full-electric option in I-Pace, we’ve got a better go-to-market proposition. Range Rover and Range Rover Sport PHEVs are a big opportunity for us; 40% of our Range Rover orders are PHEV. That certainly demonstrates that people are interested in a plug-in hybrid of that scale. Range Rover Sport is a bit less at 20%, but it’s still pretty healthy and that’s the last of our vehicles to get WLTP certification, which should be in a few weeks. The market for that’s a bit depressed I think, actually with our mix of vehicles, there’s definite opportunities to do more in the fleet market. The key thing for us is that it can’t be at the expense of our strong retail share.

Which part of the fleet market are JLR most keen on?

I think E-Pace is a big opportunity for us. If you look at the make-up of the SUV segment, it’s that SUV3 sector, along with the Evoque and Discovery Sport, that offers the best opportunity. We’ve started pretty well, with around 11,000 E-Paces this year. Although the XE and XF are the logical places to go and perhaps Range Rover and Range Rover Sport, on the back of getting hybrids towards the end of the year. So, that will be where we go from a nameplate point of view. Then, it really depends on the breakdown of the fleet market; as I said it’s not a homogenous thing, it’s very, very diverse — we will choose carefully where we play and where we don’t play.

Let’s talk about I-Pace a little bit. The press have had a look at it, they like it, we’ve had it on the market for a few months and the order book is open. Plus 300,000 people have visited the website with a quarter of a million configurations; we’ve got an order band that stretches back almost too far at six months. In September last year alone we had 1,000 people ask for a test drive. So in terms of clear expressions of interest, it’s very strong, so I want more – I want to take on more volume.

We are doing some I-Pace fleet, we’ve got a tie-up with Heathrow Airport and the WeKnowGroup to provide their zero-emissions chauffeur service. So I think there will be a bespoke and targeted approach with I-Pace and we’ll go after it strongly — but making sure I have the correct balance of profitability for our retail customers. It’s a nice problem to have, but I can’t fulfil the retail orders at the moment — that will change!

With the ongoing demonisation of diesel models, has JLR seen a rise in the sales of petrol models?

To give you some statistics, a year ago 90% of our mix was diesel, that is now 80%, so we have seen a decline. This is a direct result of press coverage, taxation policies including Benefit-in-Kind. If you look at it on a fiscal year, which runs from April to March, if we look at the absolute number of diesel vehicles that we sold in the UK across both brands, we are down 1.1%. So our mix is reduced, but in terms of our absolute number of sales, it’s an indication to me that there’s still a place for diesel in today’s market whether that’s a fleet market or a retail market. And really it’s about having the right, informed discussions with the customers.

“If we talk about I-Pace one of the key things we do for customers is to work out whether an electric vehicle is suitable for them. So we give them an app on their phone, it monitors their journeys, then over a period of time it builds a profile and we’re able to ask if this is the right car for you. Then, it might recommend a hybrid, or it might recommend a diesel but we know that for a lot of our customers, when they’re towing or doing long journeys, actually diesel, or Euro 6 clean diesel is still the best fit — with 20% less CO2, comparable to electric, but it’s just getting that message across.

I think having a well-educated sales team across retail is helping. But there’s no incentive to get older diesels off the roads and there’s an active disincentive to clean Euro 6 diesels, something we’re actively in discussions about. We’re trying to get a more balanced perspective, because again I feel it has become more binary – diesel bad, but everything else good. But that’s not the case, we’re seeing an increase in petrol penetration, at the extent of CO2 – as we’re not meeting our targets.

Long, long term, at Jaguar Land Rover, we see electrification as the future. Certainly in the medium term, we see diesel still having its place in our line-up for the journey towards zero emissions.

Have you any idea of what share of fleet sales plug-in models make up now and moving forward? How is this affecting your fleet offering?

40% of our Range Rover order bank is hybrid, 22% is Range Rover Sport, which is higher than I can currently facilitate at the moment. I think the demand is higher than that, whether it tops out I don’t know — but initially we’ve seen a really positive response to that. For the next five years we’re going to see a mix of full electric, hybrids, plug-in hybrids and traditional engines. Really depending on what a customer needs for a vehicle, all those will be very viable options.

As far as share is concerned, it’s really too early to tell. At the moment they’re the only vehicles in our range where we’re waiting for the WLTP certification.  By 2020 all models will have an electric version, whether that be a hybrid or a full-electric version — so that’s where we’re heading. That gives us the opportunity to tackle the fleet market from a CO2 perspective.

Considering the state of play at the moment, what are you hoping from Brexit?

There’s two perspectives on Brexit. If I take the Jaguar Land Rover corporate perspective, I think the position has been very clear.  Our chief executive has been very articulate and forthright in his opinion, opposed to the Government and the media.

“For us, the idea of non-frictionless trade is a complete non-starter. It’s a pre-requisite for us, we make 3,000 cars a day, 25 million components come from all over the place, there’s a proportion that come from Europe, we run a ‘just in time operation’, and without frictionless trade it’s just a non-starter. It’s as important to us as wheels on tyres — it’s absolutely fundamental!

Secondly, from a tax point of view, it’s just as important that we get a tariff-free environment. If we move to WTO terms, that’s 1.2 billion of extra cost to be absorbed globally, which is just not sustainable.

For us, getting the right Brexit outcome is frictionless trade, no tariffs and also consistent regulation across Europe. So we wouldn’t want different regulations across different environments. The sooner we get the right deal and confirmation as to what framework we’re operating in, the better. It will be a confidence boost and good for JLR, good for UK PLC and good for the UK car industry, that’s really our view.