Tesla has revealed its Model Y compact SUV, which launches from 2020 to bring seven-seat versatility and up to 300 miles for its official range. 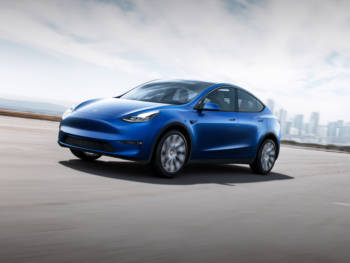 Sitting between the Model 3 and the Model X and providing a rival to the Jaguar I-Pace, the Model Y is based on the Model 3 and brings clear design similarities. As well as the optional third row, it features a panoramic glass roof and high seating along with a front boot and split-folding second-row seats.

The first models to launch in the US will be the Long-Range rear-wheel drive, plus the Dual-Motor AWD and the Performance variant.

As with the Model 3, the Model Y offers keyless operation via a smartphone and also employs a single 15-inch touchscreen interface for all of the car’s controls.

It will be compatible with Tesla’s Supercharger network – covering more than 12,000 Superchargers in 36 countries – as well as its new V3 Superchargers which can charge at rates up to 1,000 miles per hour.

The reveal of the Model Y, held last night at a launch event at Tesla’s design studio in Los Angeles, comes a fortnight after the carmaker said it’s planning on switching to an online-only global sales model, ahead of the launch of the $35,000 entry-level Model 3.