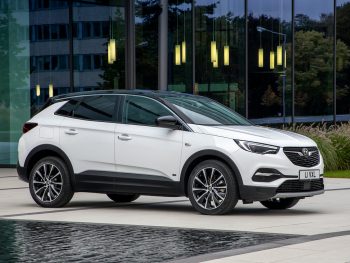 Revealed earlier this year, the Grandland X Hybrid4 marks the brand’s first-ever PHEV and forms part of plans to have an electrified version of Vauxhall model by 2024.

The front-wheel drive version uses a 180hp, 1.6-litre turbocharged, direct injection four-cylinder petrol engine and a 110hp electric motor, bringing combined power down from 300hp to 225hp and reducing entry pricing from £36,790 to £32,390. Meanwhile preliminary fuel consumption is up to 192mpg and NEDC Correlated CO2 is down slightly to 35g/km (176.5mpg and 36g/km for the all-wheel drive). And WLTP-rated full electric range rises to 34 miles from 32 miles

As with the Hybrid4 all-wheel drive version, it’s powered by a 13.2 kWh lithium-ion battery, with a 3.7 kW on-board charger provided as standard or an optional 7.4 kW version, which enables it to be fully charged in less than two hours.

The Grandland X Hybrid arrives in showrooms in April 2020.

Previous: Council-owned charging network to provide ‘reliable’ charging across west of England
Next: Fleets urged to have say in Committee on Climate Change call for evidence