Ford has expanded its Chariot ride-sharing shuttle service in London as it extends the focus to companies and campuses in Europe. 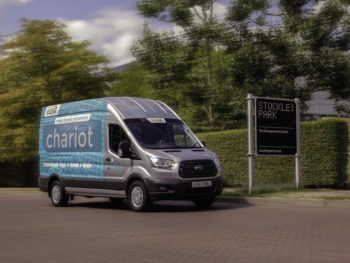 Already available in the US following Ford’s acquisition of the San Francisco start-up more than a year ago, the service launched minibuses on four routes in London in February, in a move to help commuters plug gaps in public transport.

Now, Ford is expanding its focus to serve companies and out-of-town campuses and has partnered with sustainable transport group, easitNETWORK, to launch the first new Chariot route under the plans.

The partnership will provide a pre-bookable shuttle service for people working at the Stockley Park west London business park near to Heathrow Airport, which accommodates more than 7,500 employees from a variety of major businesses including IBM, Apple and BP.

The service goes into full operation on 3 September and will be free to anyone with the Chariot app installed on their smartphone until 1 December, after which it will only be available to easitMEMBERS.

“Companies know that a good daily commute can make a real difference to their employees’ quality of life – and the quality of their work,” said Sarah-Jayne Williams, Ford’s director for Smart Mobility in Europe. “With Chariot we’re providing a comfortable, modern and efficient transport service that we think will benefit staff, their employers and – by helping to reduce traffic – the city around them.”

Plans for further scheme expansion have not been announced but Ford has previously said it’s “constantly exploring new opportunities to fulfil its mission”. The carmaker also said it was exploring opportunities in London for enterprise and charter services, currently only offered in the US.

Previous: VWFS | Fleet to expand outside of traditional company car sector
Next: Scrapping MOT could bring legal risks for fleets