London commuters can now use a Ford ride-sharing service to plug gaps in public transport under a trial approved by TfL. 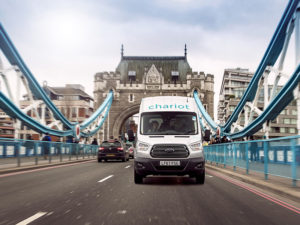 Already available in five cities in the US following Ford’s acquisition of the San Francisco start-up a year ago, the Chariot service uses 14-seater Ford Transit minibuses operating across four routes.

The service, which is only available on a pre-bookable basis via an app, is intended to provide first and last-mile commuting for commuters living in areas currently underserved by public transport and is launching on four routes, covering Battersea Park to Kennington, Wandsworth to Clapham Junction, Erith to Abbey Wood station, and Shooters Hill to North Greenwich, connecting users to onwards travel options and providing up to six shuttles per hour at peak times.

Two proposed routes, covering Fulham to Holland Park and Peckham to Bermondsey, were rejected due to concerns from residents or possible safety issues with stopping on a main route.

The vehicles operate in London’s bus lanes and offer Wi-Fi, aircon and overhead storage for laptop bags and briefcases. Selected shuttles are wheelchair-accessible.

The service is being run for free until 14 Feb on a first-come, first-served basis use the voucher code HELLOLDN. From then on, single journeys are priced from £1.60 on a monthly pass while single pay-as-you-go rides from £2.40.

“Cities globally are dealing with increased congestion and environmental issues,” said Marcy Klevorn, president, Ford Mobility. “Ford is helping to alleviate these challenges by developing mobility solutions – such as Chariot – that are finely tuned to the unique challenges of commuters in different locations, addressing gaps in transport systems and completing their travel with first- and last-mile additions.”

Future scheme launches have not been announced at this date but Chariot said it’s “constantly exploring new opportunities to fulfil its mission”. It’s also exploring opportunities in London for enterprise and charter services, currently only offered in the US.