The latest crossover evolution of the Ceed hatch is the pick of the range, reckons Martyn Collins. 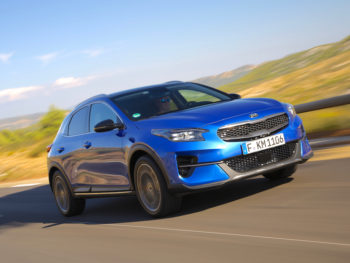 With the launch of the new XCeed range, Kia seems to have a Ceed model for everyone. Earlier this year, the Korean company proved it’s not scared of attacking new sectors – such as the Shooting Brake, with the new ProCeed. The new XCeed also takes the Ceed range into new territory by expanding into the urban crossover sector; a market that’s shown consistent sales growth. So much so that Kia is predicting this will become the top-selling Ceed model, boosted further still by the arrival in early 2020 of a plug-in hybrid version, along with a PHEV Ceed Sportswagon.

Marking it out as a distinct model, the XCeed gets a comprehensive makeover despite being based on the standard five-door hatch. It’s 85mm longer and 43mm taller and only the front doors are shared with the hatch! The sharper LED headlights, coupé-like roofline, longer, raised bonnet, high-set rear lights (which are also LED) and distinctive rear diffuser and exhaust tips also set this Kia apart from its more standard-looking sister cars.

Inside, the XCeed gives away more about its humble hatchback origins, with the familiar Ceed dashboard design, although it’s spiced up with the all-new 12.3-inch configurable instrument display – a first for the brand, plus Kia’s 10.25-inch TFT LCD infotainment system. The tallest drivers will easily get comfortable in the front of the new Kia, but that curvy roofline impacts headroom badly in the back and legroom is just average. Headroom will be affected negatively on range-topping ‘First-Edition’ models fitted with the sunroof too. Storage space is more practical though, with a 426-litre boot that can be extended to 1,378-litres with the split/fold seat down.

Kia is tipping the 134hp, 1.6-litre CRDi diesel as the fleet favourite. Married up with a slicker six-speed manual transmission than the petrol, it’s also torquier but noisier and rougher. Smooth and willing best describe the 138hp 1.4 T-GDi petrol turbo, which also gets a six-speed manual transmission. However, the latter gearbox would benefit from some revisions to the shift quality – as it feels clunky in use. The seven-speed automatic, available as an option, is the smoother choice with the petrol while the line-up also features another 118bhp, 1.0-litre T-GDi petrol.

On the road, despite the taller stance (up to 44mm higher) than the hatch, the XCeed impresses as the ride is comfortable, yet in corners the steering is precise and body roll kept well under control; the result of unique suspension tuning, and clever, hydraulic rebound stoppers. These stoppers, which are fitted to the front axle, are designed to absorb the largest suspension shocks, controlling the body movement too. A new crossmember is also added at the rear.

Kia is predicting this will be the best-selling Ceed and the third best-selling Kia model behind Sportage and Niro. A clever re-skin of the hatch, it’s good to drive.