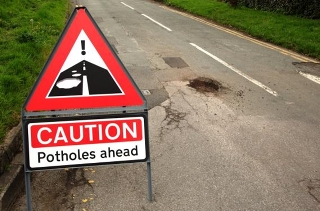 The call comes from the Asphalt Industry Alliance (AIA) as it publishes the 20th Annual Local Authority Road Maintenance (ALARM) survey, which highlights a massive 33% increase in the number of potholes filled over the last year − but says there’s the additional funding is barely keeping pace with repairs.

Despite local authorities reporting an increase in their overall maintenance budget, one in six roads in England and Wales are still classed as being in poor condition and an estimated £12.16bn is needed to get the local road network back into reasonable condition.

Alan Mackenzie, chairman of the Asphalt Industry Alliance (AIA), said: “Essentially, the money spent on filling the 2.7 million potholes reported is wasted − it is inefficient and short term in its effectiveness.

“So, while we understand that the Department for Transport is promoting permanent repairs, the point remains that money would be better spent preventing potholes forming in the first place.”

This year’s ALARM survey (2015) also reports that although authorities in England and Wales have seen their average annual budget shortfall drop by 24 per cent (from £4.2 million in 2014 to £3.2 million this year), the time it would take to clear the backlog has increased to 13 years (from 12 years in 2014).

Mackenzie added: “The £6 billion of funding pledged between 2015 and 2021 is welcome, and hopefully will be confirmed by an incoming government. But the truth is that although it sounds like a big investment, it will only be enough for local authorities to tread water and it will do nothing to tackle the backlog or prevent continuing deterioration.”

Neil Atherton, sales and marketing director, Autoglass, commented: “The majority of glass damage we see at Autoglass begins with loose stones flying up from the road or potholes but simply filling potholes does not necessarily solve the problem. In other countries we operate in around the world, we have seen this figure fall due to large scale preventative resurfacing initiatives”.

The full ALARM survey 2015 report is available for download at www.asphaltuk.org

The report comes as the RAC reveals a sharp rise in the number of pothole-related breakdowns.