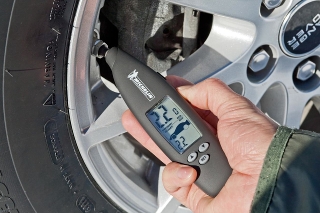 The tyre manufacturer’s analysis of more than 23,000 cars in the UK found that 37% had at least one tyre classed as either “dangerously underinflated” or “very dangerously” underinflated.

In all, 62% of vehicles were found to have underinflated tyres, while 5% of vehicles had a tyre with a puncture and 1% had tread depths below the legal minimum of 1.6mm.

Jamie McWhir, car, van and 4×4 technical manager for Michelin in the UK, said: “The proportion of cars with dangerously underinflated tyres has pretty much stayed the same over the eight years we have been running our Fill Up With Air events.

“That’s pretty depressing when you consider the volume of vehicles and the implications. Seriously underinflated tyres are dangerous, they use more fuel, they wear out quicker and they cause the car to produce more pollutants and greenhouse gases.”

Michelin classifies tyres that are between 7psi and 14psi below the manufacturer’s recommendation as “dangerously underinflated”, while 14 psi or more underinflation is deemed to be “very dangerous.”

It added that running a car with tyres underinflated by 7psi decreases fuel efficiency by about one mile per gallon. If average fuel consumption is assumed to be 45mpg on correctly inflated tyres, and average distance driven is 7,900 miles a year, motorists on 7psi underinflated tyres are using on average 18.2 litres of fuel a year unnecessarily.

At an average fuel cost across diesel and unleaded of £1.18 per litre, that means 11.84 million of the UK’s 32 million cars are wasting a total of more than £254m a year.

In addition, more than 538,000 tonnes of excess CO2 are being emitted by those cars.

McWhir added: “Last year the Department for Transport found that dangerous tyres were responsible for more than 40% of vehicle defect-related deaths. It is so important to fit tyres of a sufficient quality and then look after them properly.”

For tyre and general vehicle safety and economy advice, visit www.michelin.co.uk and explore the Learn-Share section.