Volkswagen has added new entry-level and range-topping engines for its Arteon fastback and Shooting Brake. 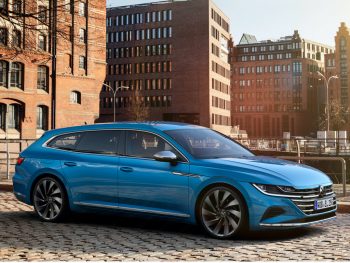 The new additions follow the first wave of models launched last month and include a new 150hp 1.5-litre TSI petrol, which now sits under the existing 2.0-litre TDi and TSI, bringing a new entry point to the range.

In fastback form with the six-speed manual gearbox, it covers the 0-62 mph sprint in 8.9 seconds, and will reach a top speed of 137mph.

The changes also bring a new 200hp 2.0-litre TDI to sit above the 150hp diesel unit launched in the initial phase. It comes with VW’s seven-speed DSG and in front-wheel drive or 4Motion all-wheel drive, and is offered with Elegance or R-Line tirms.

The latest additions to the Arteon range will be joined by the range-topping 320hp R models in 2021. A plug-in hybrid ‘eHybrid’ powertrain will also arrive for both the Arteon fastback and Arteon Shooting Brake; the date and specs are yet to be announced.