Toyota has revealed the new Corolla saloon, which joins its UK line-up after a break of almost 15 years. 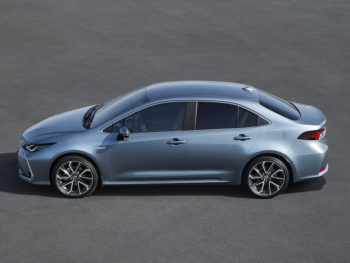 The four-door model launches in the UK in Q1 2019 as part of the 12th-generation range alongside its hatchback and Touring Sports siblings; all of which are based on the Toyota New Global Architecture (TNGA) GA-C platform. As announced earlier this year, the latest range replaces the previous Auris and reverts back to the Corolla naming still used elsewhere around the globe.

Today’s announcement marks the first time that Toyota has confirmed the saloon will come to the UK. The carmaker has said the three models will have decidedly different target audiences, with the hatchback aimed at young couples while the Touring Sports puts the focus on versatility for families and the saloon targets young professionals who want “more prestigious styling, on-board space and comfort”, backed up by its use of different front and rear styling. Both the saloon and the Touring Sports will also share the same extended 2,700mm wheelbase, bringing a focus on legroom and comfort for rear-seat passengers.

Engine line-up is expected to only offer the 121bhp 1.8-litre hybrid from the hatch and Touring Sports. Also seen in models such as the C-HR, this will offer official combined fuel economy of 65.7mpg and 98g/km CO2 on the WLTP cycle. Other markets will also be offered a 1.6-litre petrol.

Details of the UK range, specifications and prices will be announced nearer the on-sale date but Toyota has said available technology will include wireless phone charging and a multimedia set-up with an eight-inch multimedia touchscreen, seven-inch multimedia display and 10-inch head-up display.