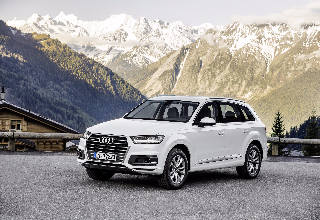 At over five metres long and over two metres wide, the latest Audi Q7 is no city car. In fact, with a footprint of over ten square metres, it’s longer and only slightly narrower than the minimum parking space size in the UK, and takes up more space than a Transit Custom or any of its luxury SUV rivals.

So it’s just as well that drives so effortlessly, because the start and end of a journey can be hard work. Country roads are challenging, car parks require huge faith in the (thankfully standard equipment) ultrasonic sensors and there’s a nagging worry about its vulnerability near careless other drivers and their wide-flung car doors.

This isn’t unique to the Q7, of course, but it does highlight that this actually rather popular segment – really engineered more for other markets – perhaps isn’t best suited to UK roads. It also creates a number of challenges for engineers to work around when engineering the cars for Europe.

Chief among them is cost. Audi’s pursuit of thriftier fuel consumption has cut 240kg out of the weight of the latest Q7 through optimised materials in the body and suspension system. BMW’s equivalent X5 is the lightest in this class, but only by 20kg, and it has two fewer cylinders. Audi also has the lowest roofline of the large SUVs – good for aerodynamics.

Like the A7, the most fuel-efficient version of the Q7 hasn’t gone for segment norms of going down to four cylinders. But the entry point is new – a 216bhp version of the 269bhp 3.0-litre TDI offered from launch, which lifts fuel economy by 1.7mpg to 49.6mpg, as well as shedding £2,585 from the price. That makes it almost as efficient as the four-cylinder X5.

However, it’s worth noting that this requires the no-cost option of downsizing to 18-inch wheels – something which can only be done in SE spec, and on the lower-powered engine. The 19-inch wheels fitted as standard have a small effect on economy which lifts CO2 emissions, in turn taking this up a BiK band. Not a deal-breaker for the target audience, but worth considering.

Because it’s lighter, the engine doesn’t feel underpowered. This never feels particularly fast, but it’ll shuffle quickly down through its eight gears to find a useful shove of torque when required. It’s surprisingly un-wallowy on rural roads, albeit with a tendency to thump over bumps on the 19-inch wheels. Fuel economy of around 38mpg is typical on the motorway, which isn’t unimpressive for a two-tonne SUV with a six-cylinder engine and mileage barely into four figures.

On the upside, size is a useful asset for upping practicality. The Q7 is huge inside, big enough to accommodate seven seats which adults can get comfortable in – though the third row is a little tight on headroom. Five seats have ISOFIX, and they all fold individually to form a flat load floor across the two rear rows. However, there’s nowhere to put the large, heavy load cover when it’s not in use, which is an inexcusable oversight on a car of this size.

Overall, Audi has done a good job of disguising some of the drawbacks of having a car this big – it’s reasonably fuel efficient, drives like an executive estate and it’s priced competitively, despite having two more cylinders than cheaper rivals. But there’s no getting around the challenges of a road network that’s designed for much smaller vehicles.

A huge step forward for the Q7, which is a competitive and credible contender in this segment. But factor in long walks from a suitably-sized parking space to your destination.