It’s the noise your phone might bug you with when an alert comes in while driving – but the word Ping is also rather handily now a potential solution to distracted or risky driving, thanks to a new global app. 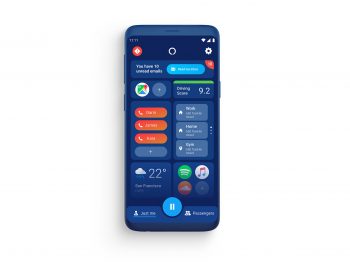 Ping is offered in both a newly launched Apple version and a longer-standing Android app, both of which can be heavily customised to suit specific fleet requirements

The app was founded by technology industry veteran Garin Toren alongside chief revenue officer Barrie Arnold, who’s got strong background in building technology for businesses to service customers – he was previously CCO for a parking app for London, called PayByPhone and sold to Volkswagen in 2016. Since then, Arnold has been working on Ping with Toren.

Arnold explains: “We founded ping with a singular mission – to get every driver, passenger, cyclist and pedestrian home safely. The problem is that distracted driving is getting worse, not better, as we become more tied to technology and due to all of the new messaging applications being used for business and social.

“The reality is that people check their phones far more often than they should, which has resulted in distracted driving being the number one cause of collisions, injuries and fatalities. And in many instances, those fatalities are those outside of the main vehicle: pedestrians, cyclists, other motorists.”

And while there are lots of fleet policies out there that say ‘Engines on, phones off’, this can affect productivity for fleet drivers.

But the app’s mission is actually three-fold:

It’s offered in both a newly launched Apple version and a longer-standing Android app, both of which can be heavily customised to suit specific fleet requirements, including the ability to only select the services that are needed. In this way, you might have a service fleet only focused on the driver behaviour and scoring side, or a sales fleet that solely wants to keep staff safely in contact with customer messages whilst on the road.

But Ping is not just targeted at end-user fleets but is also being offered to all drivers, including consumers, across the spectrum through three go-to market offerings: the standalone Ping app that can be tailored to suit fleet needs by its enterprise team; a white label or branded safe driving app that can be used by fleet management and technology firms or insurers; and finally in SDK (Software Development Kit) form, where it can be embedded into existing apps for an integrated experience.

The business is already working with a large number of global clients in these ways – supported by the fact that Ping reads in 30 languages. It’s already got one insurance company signed up in the US which is looking at the options from both the commercial and the consumer side. Ping is also in talks with a large European telecoms company about a white-label solution that the firm thinks will benefit existing customers but will also provide a way to generate revenue. Closer to home, it’s also been working CameraMatics, a specialist in camera and vehicle telematics, to embed the SDK in its safety app.

However, supported by the newly launched iOS app, which only arrived in the US in September and has been live in the UK about three months, Ping is increasingly speaking to fleets direct and it’s currently offering free pilot programmes to operators of all sizes with the only request being that they provide feedback at the end of the trial.

It’s also at pains to point out that while rival technologies do exist, none are quite the same, nor are they bundled up into one solution that can be deployed by fleets in customised form through a single link to drivers.

While Siri/CarPlay, Google Assistant or Alexa – or in-car voice assistants in premium badges – can read out messages out loud, they don’t read them all, they don’t read emails and fleets can’t choose which message types to block, eg WhatsApp group conversations. Arnold also says Ping is the first and only Alexa skill that reads all messages anytime. It can also integrate with any voice assistant.

Ping also says that while other driving behaviour solutions also monitor for areas such as harsh braking or cornering, they won’t monitor things like drivers touching their phone.

It’s also focused on cost effectiveness. Pricing ranges from £4 to £7 per driver per month depending on functionality required.

Alongside its work on enterprise partnerships, including current work with roadside assistance partners who could deploy this instantly, Ping is also focused on future developments such as extra languages and capabilities. It’s also keen to work with fleets to find out what they need for their drivers that could enhance the solution.