A new tool from the AA could help fleet drivers spot and avoid potholes, cutting down on fleet costs and downtime. 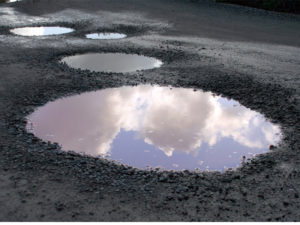 The breakdown specialist – which is increasingly turning to new technologies and services to drive its customer proposition – says it’s working on ways to record pothole data, based on the shock felt while driving, via its Car Genie onboard diagnostic tool and the Fleet Intelligence version for businesses.

Currently in development, the new tool would help fleet drivers take action against potholes and prevent fleet downtime as well as the large repair costs that can result for pothole damage.

AA data reveals that the number of pothole insurance claims for the first four months of 2018 already equals those placed for the entirety of last year, with an average repair bill of £1,000.

And although the Government recently announced that it’s giving a further £100m funding to councils to repair potholes and other severe weather damage, this year’s Annual Local Authority Road Maintenance (ALARM) survey found it would now take 14 years to get local roads back into a reasonable steady state, provided adequate funds and resources were available.

The news from the AA comes as a growing number of technologies debut to help combat the UK’s growing pothole epidemic. Earlier this year, cycling tech and data company See.Sense announced it was making pothole data from its smart bike lights available to councils to help them plan pothole repairs while Highways England revealed last year that future connected cars could automatically report potholes to help other vehicles avoid them while enabling repairs to be scheduled.

The AA is also calling for fleet managers to play their role by advising drivers on how to avoid potholes to prevent downtime and vehicle damage.

Stuart Thomas, director of fleet and SME services, explained: “Typically, fleet drivers clock up more miles each year than the average driver, due to the distances they cover across the UK. Equally, they are more likely to encounter potholes on unfamiliar routes.”

“Keep your distance from cars in front, in case they swerve or brake suddenly due to a pothole. This will give you a clear view of the road surface ahead. If you see a pothole, slow down and steer to avoid driving over it if possible. Don’t swerve suddenly or brake sharply, as you could find yourself causing a bigger accident,” he added.

The AA has recently launched the Flag it, Fund it, Fill it campaign, which encourages people to photograph and report potholes. This follows a letter sent by the AA to the Chancellor calling for more funds to fix potholes across the UK.