More than 24,000 miles of local roads have been identified as needing essential maintenance within the next year – a distance that would almost stretch the whole way around the world. 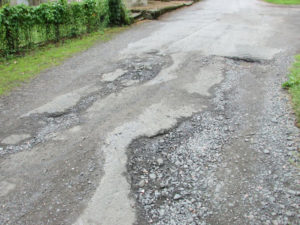 The AIA report says more than 24,000 miles of local roads need essential maintenance within the next year.

According to the newly published Annual Local Authority Road Maintenance (ALARM) survey for 2018 from the Asphalt Industry Alliance (AIA), one in five of our local roads are now classed as structurally poor – with less than five years’ life remaining – compared with one in six reported last year.

According to the findings, it would now take 14 years to get local roads back into a reasonable steady state, provided adequate funds and resources were available.

Rick Green, chairman of the AIA, said: “Local roads are a vital asset, worth in the region of £400bn, and they support all aspects of our daily work and home lives. But funding for their adequate maintenance has fallen short for so many years that further deterioration is inevitable.

“We accept that there is no magic wand to wave, nor is there a bottomless pot of money to tap into. There are difficult choices to be made at both local and national level but the government needs to provide adequate funding for a well maintained and safe local road network if it wants to support communities and drive economic growth.”

Responding to the findings, both the RAC and the Local Government Association called for funds from existing fuel duty revenue to be reinvested in local roads.

Nicholas Lyes, RAC head of roads policy, said: “If just a fraction of existing fuel duty revenue was ring-fenced specifically for local roads, over just a few years enough could be raised to allow councils to make proper, lasting repairs that are fit for the 21st century. As things stand, all road users are faced with the prospect of road surfaces falling into an even worse state making for increasingly uncomfortable, expensive and, in some cases, downright dangerous journeys.”