By Jonathan Musk / 1 month ago / Latest News / No Comments

The new BMW 4 Series Coupé adds mild-hybrid technology to its engine line-up, as well as a new-look exterior and interior. 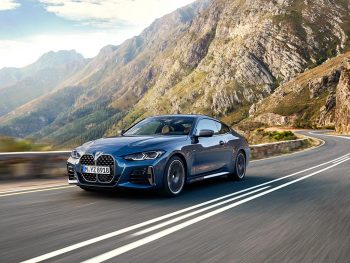 Built in the 3 Series chassis, the new 4 Series Coupé launches in October and is bigger in every way. Dimensions have grown – 128mm longer, 27mm wider and 6mm taller – and so too have its distinctive kidney grilles. LED headlights are standard across the range, with BMW’s LaserLight an option.

The range will be spearheaded by a new BMW M440i xDrive Coupé model, which features a straight-six petrol engine. The new car will also be available with a choice of two four-cylinder petrol units and a four-cylinder diesel from launch, each with BMW TwinPower Turbo. The straight-six petrol and both diesel options are equipped with 48V mild-hybrid technology to enhance efficiency.

The line-up is set to expand further with the arrival of two straight-six diesel engines scheduled for March 2021. At time of writing, there is no mention of a 4 Series Coupé plug-in hybrid despite the car being based on the 3 Series platform. However, the battery-electric BMW i4 should share many similarities with the new Coupé and offer the complete electric driving experience.

For the first time, every 4 Series Coupé comes as standard with an eight-speed Steptronic transmission.

Technology-wise, the new 4 Series Coupé benefits from a host of upgrades, including Android Auto in addition to Apple CarPlay. Drivers will also appreciate the Parking Assistant, which aims to simplify the task of parking, by taking care of steering the car, accelerating and braking, and any necessary gear changes.