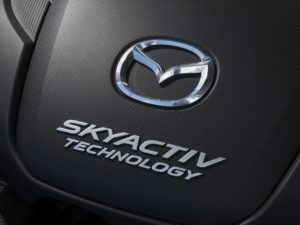 Mazda sees the combustion engine as a core technology, but is developing EVs.

Although the carmaker is developing electric and hybrid drivetrains, as part of an alliance in Japan, it expects combustion engines to be prevalent for some time – still powering 80% of passenger cars on the road by 2035.

Mazda’s ongoing focus is improving the baseline technology before adding electrification, which will include ‘mild hybrids’ from next year and plug-in hybrids launching in 2021. Its target is petrol engine ‘well to wheel’ CO2 emissions (accounting for production and distribution of the fuel or energy) which are lower than a battery electric vehicle.

It believes electric vehicles won’t offer a significant reduction in well to wheel CO2 emissions until a higher share of the electricity used to power them comes from renewables rather than sources such as coal. Last year, Mazda said even a 10% improvement in its petrol engines would allow them to almost match an electric vehicle.

However, that’s analysis which isn’t based on country-specific data, and the UK’s grid mix is improving. Figures from the Department for Business, Energy & Industrial Strategy (BEIS) showed renewables reached a record high of 29.4% of the UK’s total energy generation last year, second only to gas at 39.7%, while coal dropped to a record low of 6.7%.

BEIS Greenhouse Gas Conversion Factors, meanwhile, reflect a 15% decrease in the CO2 equivalent factor during 2017, and a 19% drop so far in 2018, owing to increased use of natural gas and the phasing out of coal-based production, as well as the rising use of renewables. This calculates an equivalent of 280 grams of CO2 being emitted per kWh of energy generated.