By Alex Grant / 3 years ago / Interview / No Comments

Settling under its new owners, LeasePlan UK is setting out plans to meet the needs of an increasingly diverse fleet sector, as managing director Matt Dyer explains. By Alex Grant. 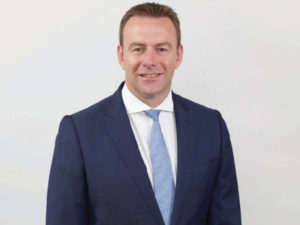 It’s less than a year since LeasePlan’s acquisition by Dutch consortium LP Group BV yet, despite the potential disruption of a number of management changes since, 2016 shaped up as a positive year for the UK business. After a strong 2015, it recorded 15% fleet growth across its portfolio; including solutions for SME, corporate, public sector and broker and franchisee customers.

But, as UK managing director Matt Dyer explains, it’s seeing a shift in customer base: “It was very clear to me when I was here in the UK in late 2009 and 2010 that [the SME sector] came out of the recession far quicker than corporate,” he recalls. “I would say there’s a bit of uncertainty around from small business perspective, with the economic backdrop there’s lots of looking at certain results and trying to take some comfort and hope out of them, but SME has grown significantly. It’s over 50% of our business, and commercial vehicles are over a third.

“We’ve got over 55,000 commercial vehicles on our fleet, we’ve probably added something in the region of 25-30,000 in the last five years. I guess that shows you the shape of how the business is changing – there’s a lot more about supporting customers for whom vehicles are business critical rather than the benefit-driven schemes we might have seen in the past.”

Dyer highlights figures from the Federation of Small Business, showing that SMEs employ 15.6 million people – over 60% of the private sector. That’s across 5.4 million organisations, of which 4.1m are owner-operators, the sector accounting for around 55% of the UK’s 4.5 million fleet vehicles, he adds. Supporting them during periods of uncertainty is critical.

But stability is just as important elsewhere. As vice chairman of the BVRLA and within LeasePlan UK, Dyer says consistency of information has been something he’s been eager to lobby for. Particularly since the 2015 Autumn Statement’s diesel surcharge announcement showed big changes aren’t always brought in with much notice.

“We’ve had to do a lot of work to make the case for why company-provided vehicles are really important to the health of business and economy in the UK. We keep working hard to do it but reverts back to HM Treasury seeing it as potential for revenue and that’s a shame,” he explains.

“[The diesel surcharge] took a bit of momentum out of demand, because I think we were just starting to see the situation where the number of Benefit-in-Kind taxpayers was starting to increase again. That has impacted people’s choice in this area, but I also think it’s probably impacted people who didn’t have a choice. People who have to take a vehicle for the job are hostage to the impact it’s made on them.”

A lot of the frustration comes from mixed messages – Dyer says it’s not always clear about what tax changes are trying to achieve. Recently that includes potentially undermining salary sacrifice, which has been effective at getting drivers into efficient small cars, while aiming to encourage the uptake of ultra-low emission vehicles with new Benefit-in-Kind bands. “If you look at this it’s difficult to know what’s important,” he says. “Is it revenue, or moving the quality and efficiency of fleets forward?”

Customers’ needs and expectations are diversifying, too. Dyer says LeasePlan UK has invested heavily in Engage, its customer service programme, and it’s trying to offer the experience drivers expect – app and web portal based for those who want it, and the ability to talk to someone for those who don’t. With a growing appetite for car sharing and a blend of vehicle provision – leases and long-term rentals – to suit particular needs, the need to offer a product portfolio and in-house expertise to support evolving customer demands has never been more important. Ongoing support and investment of the company’s own team is aimed at backing that up.

“It wasn’t much more than five or six years ago where large percentages of commercial vehicle operators were still buying rather than leasing. So this is around building the capability and trust with your customer that you can look after their needs in that particular way. There’s definitely an appetite that there’s no one size that fits all – you take different types of vehicle provision to fit the circumstances.”

So, despite the changes within, it’s the external factors which are the bigger challenge; the uncertain political and economical landscape which shapes businesses’ decisions. Dyer sees the fleet sector playing a pivotal role in what could be a bumpy few years, and he’s keen to make sure that importance is recognised outside the industry itself.

“It doesn’t feel like people are willing to call out how important company provided vehicles are to a successful economy,” he says. “We always talk about Benefit-in-Kind taxation, we never talk about how we get more company cars on the road. We’re trying to make sure we give all the right reasons as to why some of these things should be defended. If the health of the economy is crucial going forward, then of course company provided vehicles have a role to play in that.”2017 ambitions…

The right team: Named as one of Britain’s top employers and holding the Investors in People Gold standard, Dyer takes pride in having a specialist team on board and continuing to develop them. It’s a core part of catering for an evolving industry: “Our sector is an interesting one as it’s part business services, part financial services and part automotive. The business services part of it tells you that the way you interact with your customers, through your people, is what differentiates you,” he says.

Being flexible: There’s no solution to fit every business need, and increasingly it’s helpful to offer a selection so customers can pick and choose. FlexiPlan launched in March 2016 to offer flexible contracts, while insurance and car sharing are on the company’s radar too. “It’s easy to look at all sorts of opportunities and think every one is the right answer,” Dyer says. “Actually what you’ve got to do is be led by your customers.”

SMEs: Supporting small businesses – for whom vehicles are business critical – is vital during economically uncertain periods. For LeasePlan UK, it’s been a growth area, but Dyer also sees it as a big opportunity over the coming years.