Land Rover has revealed pricing for the smaller, short-wheelbase Defender 90, due to arrive later this summer. 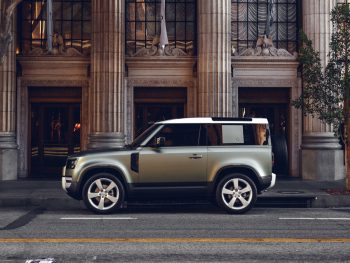 Pricing starts from £40,290 in the UK for the Defender 90, while the Defender 110 is priced from £45,240. In addition, commercial derivatives that lose the rear windows in favour of panels are priced from around £35,000 (plus VAT), while a highly efficient Plug-in Hybrid Electric Vehicle (PHEV) powertrain will also join the line-up although pricing is yet to be announced.

The Defender 90 can seat up to six people thanks to a middle-front seat (jump seat), despite the vehicle being shorter than a Ford Focus. When not in use, the extra seat doubles as an armrest and oddment stowage plus cupholder.

The Defender is available with optional packs, including Explorer, Adventure, Country and Urban. Proving the most popular is the Urban Pack, which includes a front undershield, bright rear scuff plate and metal pedals, plus a spare wheel cover on the Defender 110.

The new Defender is already proving a success, the company says, with more than 1.21 million people configuring a vehicle using the Land Rover website.

Finbar McFall, Land Rover global product marketing director, said: “We have experienced unprecedented demand for New Defender 110 and the official introduction of Defender 90 is sure to boost interest. As the family grows to include an efficient plug-in hybrid powertrain and commercial derivatives later this year, we look forward to continuing this success. If our experience with the Defender 110 is anything to go by, we can expect over half of customers to opt for one of the four Accessory Packs, making New Defender the most accessorised and personalised Land Rover we have ever produced.”

Find out more about the new Land Rover Defender in our Spotlight, here.