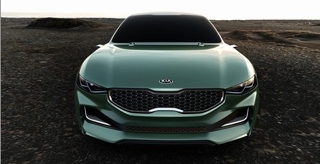 Expected to preview the next-generation cee’d, the Novo – which comes from the Latin 'novatus' and is said to stand for the concept of making something new and fresh – gives clear hints at future Kia styling and strategy.

The interior brings minimalist design forms and is intended to provide “a sanctuary from the frenzied outside world”.

The instrument binnacle shows relevant information through a compact three-dimensional hologram display, while a 'blind control' touch pad next to the steering wheel allows drivers to control the car's many functions without having to take their eyes off the road ahead. The touch pad incorporates a fingerprint scanner whilst a wide touchscreen in the centre of the dash displays the car's full range of functionality. The interior also brings four individual dark brown leather sports seats.

The Novo is powered by a 1.6-litre 'Kappa' turbo gasoline direct injection (T-GDI) engine with the brand's seven-speed DCT.