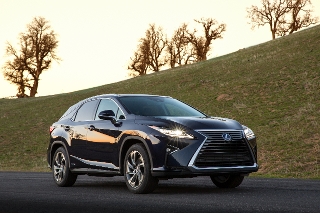 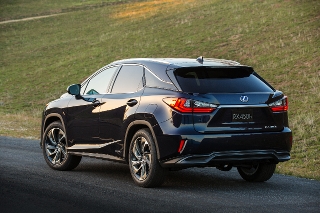 The new model brings a completely new front-end with a stronger spindle grille design with a chrome-finished border and triple L-shaped LED headlamps along with redesigned fog lights.

From the side, the RX features blacked-out C-pillars to give a floating roof effect along with new 20-inch aluminium wheels (replacing the current 19-inch rims), which can be customised with different coloured inserts.

The rear brings new L-shaped taillights that wrap around the sides of the vehicle.

The cabin puts the emphasis on comfort and luxury, with repositioned trim elements and a large head-up display that takes centre stage, while the information zone features a 12.3-inch monitor, set apart from the cockpit’s main operation zone.

The longer wheelbase means more leg and knee-room for rear seat passengers. The rear seats themselves can be equipped with power recline adjustment and heaters. A panoramic sunroof is also on offer.

The new RX will be available (according to market) with an upgraded, more powerful 3.5-litre V6 petrol engine with a target output of 300bhp, matched to a new eight-speed automatic transmission.

The full hybrid powertrain will feature an improved, Atkinson cycle 3.5-litre V6. System output, including the electric motor, will also be around 300bhp.

Both engines have been tuned to achieve high fuel economy and low carbon emissions.

Also included in the range is the new RX F Sport, which brings sportier styling and performance features including an active stabiliser system, which keeps the vehicle remarkably flat through corners. Adaptive Variable Suspension is fitted as standard while the Drive Mode Select system adds a Sport S+ mode with AVS in addition to the Eco, Normal and Sports S settings.

The new RX also brings better handling and stability. The entire chassis has been strengthened to provide better stability and control through bends. The body structure has been made stronger, too, with extra stiffness that contributes to drastically improved handling response and to a reduction in engine and road noise levels in the cabin.

The Vehicle Dynamics Integrated Management (VDIM) is designed to recognise potentially dangerous situations and to make automatic and often transparent adjustments to ensure the car is kept under control when entering and exiting corners. All-wheel drive comes as standard and most RX versions will be available with Adaptive Variable Suspension (AVS), which electronically monitors and adapts suspension damping and steering to secure the best handling and ride according to the driving conditions.

The RX also marks the introduction of Lexus Safety System+ package of advanced preventive safety features. This integrates several existing Lexus active safety technologies: the Pre-Collision System (PCS), which detects and warns the driver of potential collision risks with vehicles, pedestrians and obstacles on the road ahead; Lane Departure Alert (LDA), which triggers a warning sound if the vehicle moves out of its lane without signalling; and Automatic High Beam (AHB), which helps maintain the best forward visibility when driving at night.

Details and specifications of the production model for the UK and Europe will be announced later this year.