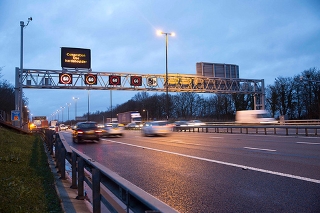 In addition all systems use lane control, overhead gantries and emergency refuge areas.

However, motorists have raised concern over the safety of drivers who had broken down on a motorway with no hard shoulder, and the increase in distances between safety refuges.

The IAM conducted a survey on the introduction of SMART motorways last year, which found 71% of drivers said they would feel less safe on a motorway with no hard shoulder than a motorway with one.

Some 40% of respondents said they were sceptical that new monitoring systems on SMART motorways, such as traffic detectors and CCTV, would protect them in the event of stopping in a running lane.

Sarah Sillars, IAM chief executive officer, said: “Highways England must analyse incident data on a continuous basis and ensure that any lessons learned from the real world use of SMART motorways are implemented quickly. Ultimately, the smartest way to build awareness would be to allow learner drivers to use motorways under expert supervision.”

The IAM has produced a set of tips on using SMART motorways, and how to react on seeing different signals: