A new government campaign has launched to raise awareness of the introduction of E10 petrol. 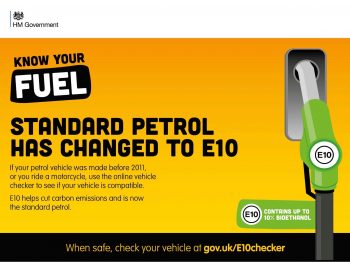 The greener fuel will become the standard grade of petrol at UK pumps by September 2021 and the new campaign will make drivers aware of the changes.

But there are downsides including vehicle compatibility; while every new petrol car sold since 1 January 2011 has been required to be fully warranted to use E10, older vehicles may need to still use E5 fuel.

The Government has said it will continue supplies of E5 petrol in the ‘Super’ grade and the campaign will advise motorists to use the new E10 compatibility checker to see if their vehicle is compatible.

Transport Minister Rachel Maclean said: “This campaign will not only make drivers aware of the changes we’re making, but will also show millions of motorists how E10 introduction plays a part in helping reduce carbon emissions and build back greener with every tank of petrol.”