Greener E10 fuel is to become the standard grade of petrol at UK pumps by September 2021, helping to cut transport CO2 emissions but potentially increasing fuel costs for drivers. 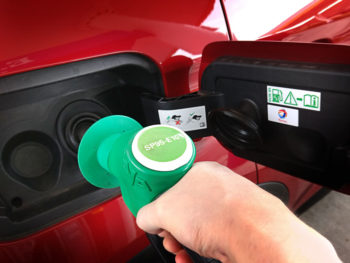 The widely expected move follows a consultation with drivers and industry and could cut CO2 by 750,00 tonnes a year – equivalent to taking up to 350,000 cars off the road. This is thanks to the higher 10% blend of bioethanol used in E10, which is up from the current 5% limit in E5 and key to its eco-friendlier credentials.

As such, E10’s introduction as the UK’s standard petrol grade is “one of the most effective ways we can significantly cut our carbon emissions at a stroke”, according to Andy Eastlake, managing director of the Zemo Partnership (formerly the Low Carbon Vehicle Partnership).

The introduction of E10, which is a mixture of petrol and ethanol made from materials including low-grade grains, sugars and waste wood, will also boost job opportunities in the north east. This includes the reopening of AB Sugar’s Vivergo plant and increased production at existing biofuel plants in the UK, which will ensure the materials needed for E10 are produced and refined in the UK.

There are some downsides though. While every new petrol car sold since 1 January 2011 has been required to be fully warranted to use E10 – which means fleet cars won’t be affected –older vehicles, including classic cars and some from the early 2000s, will continue to need E5 fuel. The Government has said it will continue supplies of E5 petrol in the ‘Super’ grade and is advising motorists to use the new E10 compatibility checker to see if their vehicle is compatible.

The switch to E10 could also impact on fuel costs for motorists; while moving from E5 to E10 is estimated to reduce pump price petrol costs by 0.2 pence per litre, the energy content of the fuel will also decrease, meaning motorists will have to buy more litres of fuel.

As a result, overall fuel costs for petrol cars are therefore estimated to increase by 1.6% as a result of moving from E5 to E10.

AA president Edmund King has said this could “rub many drivers the wrong way”, but the organisation outlined that it “expects the chancellor, who will get more fuel duty from more fuel consumed, will not have to increase fuel duty in the Budget next week”.

He added that the AA broadly supports the rollout of the fuel, which King said provides a ‘stepping stone’ to the phasing out of fossil fuels in new cars from 2030 onwards.

Mike Hawes, SMMT chief executive, said: “The announcement today confirming E10 petrol will be available for motorists from this September is another step towards the 2050 net zero target. Its introduction is significant in that it assists with the decarbonisation of the existing UK car parc as well as those new cars powered by petrol engines.

“Vehicle manufacturers have been preparing for its introduction for many years so drivers can be reassured that it is compatible with most cars currently on the road. Together with the introduction of new electrified vehicles, the range of which is accelerating rapidly, this new fuel will help reduce the overall emissions of road transport for many years to come.”

Previous: Failure to plan for end of lockdown could bring fleet downtime
Next: Hyundai to recall 82,000 electric vehicles globally over battery fire risk