Hydrogen vehicles could buck the trend when it comes to depreciation, providing added incentives for fleets to deploy them as more models and refuelling stations arrive in the UK. 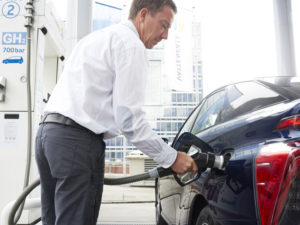 Hunt explained: “In the case of a hydrogen fuel cell vehicle, the traditional residual value model no longer applies as unlike combustion engine or battery powertrains, the fuel cell does not wear out, extending the life and value of a vehicle with relatively low-cost cosmetic refurbishment.”

His comments are backed by work by ACAL Energy, which develops fuel cell systems – in 2013, the firm’s FlowCath hydrogen fuel cell became the first to break a 10,000-hour endurance test without significant degradation in performance. In fact, most fuel cells are rated at between 5-10,000 hours, or the equivalent of 150-300,000 miles.

Technology benefits aside, vehicle pricing and fuelling infrastructure issues for hydrogen cars need to be resolved before the market will see mass take-up but this may not be far away – according to Glenn Sturley, chair at the VRA,  at last week’s meeting: “It is not unlikely that we could see hydrogen start to make a general push onto the market within a few years.”

Following a test drive of the hydrogen-powered Toyota Mirai FECV at the event, Sturley added: “These are cars that offer the drivability of an EV but can be fuelled as quickly as a petrol or diesel car, plus have zero emissions at the point of use and can potentially be powered by localised generation. Their advantages are obvious.”

Toyota, Honda and Hyundai are the main carmakers pursuing a possible hydrogen automotive future, with the Toyota Mirai, Honda Clarity and Hyundai Nexo respectively. Each of these vehicles offer range in excess of 300-miles to one fill of their hydrogen tanks, which takes between 5-10 minutes.

Hydrogen infrastructure has been the biggest drawback to date, with few filling stations available to support up-take. However, last week saw Allstar announce that its fuel cards are now accepted at ITM’s hydrogen fuel network.

In addition, more than 90% of hydrogen gas is currently sourced from fossil fuel, although ITM Power has developed a renewably powered hydrogen generator that extracts the gas from water.