The Combo Life is put to the test with a family holiday. 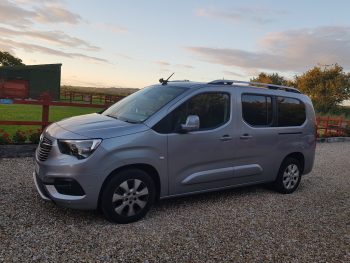 Bathed in a Somerset sunset; our long-term Combo Life

The annual Middleton family holiday is the ultimate test in this house for any vehicle, involving taking my kids and my disabled mum and paraphernalia to see friends and family, normally in Somerset. It’s seen a number of seven-seat SUVs, including the 5008, Tarraco and Kodiaq, used in recent years.

This year, we took the Combo Life and made the most of its practical and extensive luggage-carrying features. We don’t travel light – some years there’s been two wheelchairs onboard – and getting everything in the boot normally takes some time, headscratching and a Tetris-style methodical approach. This year, the Combo Life swallowed everything and more thanks to our long wheelbase XL’s 850 litres of boot space, which rises to 2,693 with the middle seats folded down and the rear seats removed – in fact we could have even saved some money on renting a cottage and slept in it…

We also have the optional (£300) child pack so our front passenger seat folds down – giving a 3m-long loadthrough space – as well as a luggage restraint net that either slots behind the front or second row of seats to ensure luggage is held in place. And all models also come with three ISOFIX mounting points in the three middle-row seats, not that we needed them.

In the end, we didn’t actually need to use its rearmost seats either this time – but the fact that they were ready and waiting to accommodate proper adults, rather than kids as with many seven-seat SUVs, was great.

The Combo Life’s relatively small footprint – it’s shorter than some large SUVs – was also appreciated in beach carparks and the like. As were the sliding doors. And the amazing panoramic rear-view camera with multiple views and front and rear sensors; part of the £400 parking pack. It was also nimble enough at heading round country roads although I baulked and gave up at a trip, sometimes single track, up to Selworthy Beacon.

It’s very good for visibility too despite some rather wide A-pillars – of course, increasingly common these days – and the large wing mirrors.

The 130hp diesel on our version proved fine, although I noticed the difference in performance with a full complement of luggage and more portly relatives onboard. Nonetheless, it managed to pull out fairly quickly on the entrance to our accommodation, hidden just after a bend on a country road, and held its own on motorways. It’s refined enough too, the main thing is the wind noise at speed, including from the aforementioned wing mirrors. And the dynamics of this car means it’s not one that you’re ever going to be racing round corners with.

In fact, the only complaint for the trip came from my mum, who was not happy with the lack of a vanity mirror on the front passenger’s side visor. The fact that our one gripe was so minor is indicative of how easy this car is to live with and just how much it has to offer compared to seven-seat SUVs.